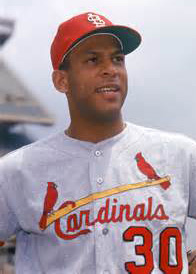 Orlando Cepeda may have only played three seasons in a St. Louis Cardinals uniform, but he left a legacy far more reaching than those years. A powerful slugger during his 17-year Major League career, Cepeda withstood a series of knee injuries to become a seven-time National League All-Star. As a 20-year-old rookie with the San Francisco Giants in 1958, he hit .312 with 25 home runs to earn unanimous National League Rookie of the Year honors.

Nine years later, he compiled a league-leading 111 RBIs while helping to lead the Cardinals to a 1967 World Series Championship. In his three seasons with St. Louis, Cepeda averaged nearly 20 home runs, 30 doubles and 80 RBIs.

Orlando Manuel Cepeda was born in Ponce, Puerto Rico. Cepeda’s father, Perucho, was a big, power-hitting shortstop nicknamed the “Babe Ruth of the Caribbean,” but more commonly known as “The Bull.” Cepeda often answered to Peruchin, and would come to be called “The Baby Bull” (and also Cha-Cha) by his fans.

As a youngster, Cepeda developed problems with his legs. Around the age of 13, he injured his right knee for the first time. The condition was corrected with an operation on his right leg in 1952 that included the removal of knee cartilage. It kept him in bed for two months and on crutches for almost half a year. The upside of this time away from the diamond was he gained more than 40 pounds, which he converted into muscle, and he was transformed from a singles to a power hitter.

But in 1965, new Giants manager Herman Franks put Cepeda in left field, even though he was aware of Cepeda’s tender knee. Early in the year, Cepeda dove for a ball and injured the knee again, this time seriously. He played in only 33 games that year, mostly as a pinch-hitter. In 1966 he practically begged Franks to let him play first. After getting a thumbs-down on this request, Cepeda asked to be traded. That’s when the Cardinals came calling. They offered Ray Sadecki and the deal was done on May 8th.

Cepeda batted cleanup and hit well for St. Louis the rest of the way. He played 123 games for the Cards in 1966 and led the team with 17 home runs, 24 doubles, a .303 average and a .469 slugging mark. In 1967, Cepeda was the embodiment of what is today called an “impact player.” In a scintillating first half, he was leading the majors in hits and batting average, and driving in runs in the clutch. The Cardinals cruised to the pennant by 10 games. Cepeda finished the year with a league-high 111 RBIs, and a .325 average—no small feat when the rest of the league’s first basemen hit 50 points lower. He blasted 25 home runs and added 37 doubles, 91 runs and 11 stolen bases. He also led the team with 62 walks. The Cardinals beat the Boston Red Sox in an exciting seven game World Series. In a year when even the best batsmen sometimes felt they couldn’t buy a hit, Cepeda strode to the plate daring pitchers to get him out. Mike Shannon said it was like having a big guy on your side in a fight; opponents looked at Cepeda and felt like they were going to lose. He also was a clubhouse comedian, as well as the unofficial music director—bringing his top-of-the-line stereo equipment in and playing records before games.

The ’67 Cardinals are considered one of the great teams in history, and Cha Cha was one of the leaders. After the season Cepeda was unanimously named the league’s Most Valuable Player, the first unanimous choice in league history. The 1968 Cardinals were prohibitive favorites to repeat as champs, and they nearly did. Only a remarkable comeback in the World Series by the Detroit Tigers prevented St. Louis from winning back-to-back championships.

Like many sluggers, Cepeda saw his numbers plummet in the Year of the Pitcher. He batted just .248. He did hit two home runs in the team’s ultimately unsuccessful World Series. With Opening Day less than a week away in 1969, the Cardinals traded Cepeda to the Braves for Joe Torre.