Lasorda in 63rd Season With Dodgers

Tommy Lasorda, one of baseball’s most popular ambasadors, is in his 63rd season in the Los Angeles Dodger organization. In 1996, after 20 successful years managing the Dodgers, Lasorda was named vice president and then senior vice president two years later. He is now special advisor to owner and chairman, Mark Walter, while scouting, evaluating and teaching minor league players, acting as an advisor and ambassador for the Dodgers’ international affiliates, and representing the franchise at some 150 speaking engagements each year in support of various charities, private groups and military personnel.

In an extraordinary 20-year career as the Dodgers’ manager, Lasorda compiled a 1,599-1,439 record and won two World Championships, four National League pennants and eight division titles. He ranks 18th among managers in Major League history with 1,599 wins and is only one of five managers to manage the same team for 20 years or more. Lasorda had a 3-1 record as the NL manager in four All-Star Games. He is one of only two managers in NL history to win league titles in his first two seasons when he led the Dodgers to titles in 1977-78. Lasorda also managed nine of the Dodgers’ 16 Rookies of the Year, more than any other big league skipper in history. 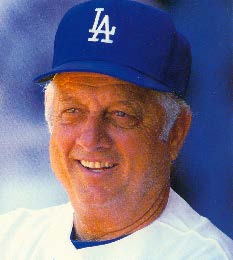 After retiring as a player following the 1960 season, Lasorda spent four years as a Dodger scout then took coaching roles within the organizations minor league system. An astounding 75 players Lasorda managed in the minor leagues went on to play in the Majors, many of them under Lasorda himself.

In 1997, Lasorda was elected to the National Baseball Hall of Fame, becoming the 14th manager and 52nd Dodger inducted into the Hall. In 2009 Lasorda had his portrait installed in the Smithsonian Institution’s National Portrait Gallery as part of the celebration of his 60th season with the Dodgers. Though the National Baseball Hall of Fame is his most prestigious honor, Lasorda has also been enshrined in 17 different sports and cultural Halls of Fame. Lasorda’s uniform number (2) was retired by the Dodgers in 1997 and the main street that leads to the entrance of Dodgertown in Vero Beach, Fla., was renamed Tommy Lasorda Lane in 1997. 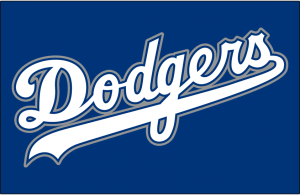 In the 2000 Olympic Games, he managed the underdog U.S. team to a gold medal in Sydney, Australia – a feat Lasorda considers his greatest professional achievement. In 2006, MLB commissioner Bud Selig appointed him as the official ambassador of the inaugural World Baseball Classic, and again for the 2009 Classic that was played at Dodger Stadium. In this capacity, Lasorda has visited 28 countries as a spokesperson for the tournament and to promote the game of baseball. Awarded the Order of the Rising Sun by the Emperor of Japan for his contributions to Japanese baseball, he has made countless trips to Asia over the years, serving as a Dodger liaison in support of “friendship” agreements with Japanese, Korean and Taiwanese teams. He threw out the first pitch in the China Baseball League’s first “World Series” in 2002.

In September 2006, Lasorda received the Branch Rickey Award from the Denver Rotary Club for his lifetime of community service. Lasorda has been a spokesperson for the American Heart Association and regularly visits patients at the Tom Lasorda Heart Institute at Centinela Hospital Medical Center in Inglewood, Calif. He is also an official spokesperson for the Prostate Cancer Foundation. Lasorda sits on the boards for the Statue of Liberty/Ellis Island Foundation and the U.S. Army Recruiting Advisory Council. In December 2011, Rawlings presented him with the Rawlings Heart of Gold award for his philanthropic efforts. Lasorda has spoken to troops at more than 40 military bases around the world.

Many of Lasorda’s greatest accomplishments and stories have been compiled in “I Live For This,” his autobiography that came out several seasons ago. His first book, “The Artful Dodger” was released in 1986.

Lasorda and his wife, Jo, reside in Fullerton, Calif., and celebrated their 63rd wedding anniversary on April 14, 2013. The couple renamed a gymnasium and youth center in memory of their son, Tom Jr., in Yorba Linda, Calif., in 1997.