Affectionately called The White Rat, Herzog earned respect in baseball for his superb managerial skills. He led six division winners, three pennant winners and one World Champion (the 1982 Cardinals). He was named Manager of the Year in 1976 by UPI, and in 1982 by TSN and UPI. He was also voted Manager of the Year by the BBWAA in 1985 for leading St. Louis to the NL pennant. In 1981 and 1982, when he was also GM, the UPI named him Executive of the Year as well. 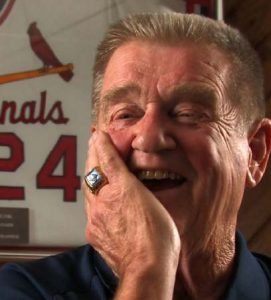 Columnist Larry King once said, “Every game is like a chess match with Whitey, and other managers must feel like they are playing against 10 guys when they go up against him.” Although Whitey Herzog had an eight-year career as a major league  player, he is much better known for the 19 years that he managed in the major leagues. He was elected to the Hall of Fame in 2009 and his induction was in 2010.

Herzog was signed by the New York Yankees out of high school, his minor league career, interrupted for two years by military service in 1953-54, spanned six seasons. Although he never played in a major league game for the Yankees, Herzog was profoundly influenced by their manager, Casey Stengel, during several spring training sessions with the Yanks. He hit .291 in the minors, playing for both the Yankees’ and Washington Senators’ farm teams.

An outfielder, he broke in with the Senators in 1956, hitting only .245 but getting 7 triples. He was eventually relegated to back-up duties, and then sold to another perennial doormat team, the Kansas City Athletics, in the days when Roger Maris was an outfielder there. Herzog hit a personal-best .293 in 1959.

He was traded to Baltimore in 1961, and hit .291 on a team that finished third in the league. But he was again relegated to being a back-up outfielder after that and finished out his career in 1963 with the Detroit Tigers.

After retiring as a player, Herzog stayed in baseball, serving Kansas City A’s as a scout (1964) and coach (1965) and the New York Mets (1966-1972) as a coach, scout, and eventually as farm director. But Whitey’s real success came as a manager with both the Kansas City Royals of the 1970’s and the St. Louis Cardinals of the 1980’s. He gained success with his teams by incorporating “Whiteyball.”

He also managed the Texas Rangers and California Angels. He was general manager of the Cardinals from 1980 to 1982 and of the Angels in 1993 and 1994.

Herzog’s style of play, based on the strategy of attrition, was nicknamed “Whiteyball” and concentrated on pitching, speed, and
defense to win games rather than on home runs. Herzog’s lineups generally consisted of base-stealing threats at the top of the lineup, with a power threat such as Brett or Clark hitting third or fourth, protected by one or two hitters with lesser power, followed by more base stealers.

That tactic kept payrolls low for the most part, while allowing Herzog to win a lot of games in stadiums with deep fences and artificial turf, both of which were characteristics of Royals Stadium (now Kauffman Stadium) and Busch Stadium II during his managerial career.

A less noticed (at the time) aspect of Herzog’s offensive philosophy was his preference for patient hitters with high on-base percentages, a tactic Bill James and moneyball latched onto in more recent years, such players included the Royals’ Brett, Hal McRae and Amos Otis, and the Cardinals’ Clark, Hernandez, Oquendo and Ozzie Smith, as well as Darrell Porter, who played for Herzog in both Kansas City and St. Louis. However, in St. Louis, Herzog also employed free-swinging hitters who were less patient but fast runners and base stealers, such as Coleman and McGee.

Herzog was elected to the Baseball Hall of Fame in 2009 and inducted in 2010.