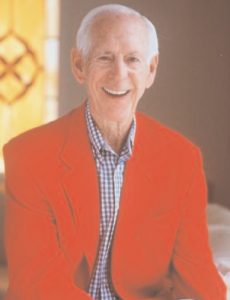 Buck was born in Holyoke, Mass., the third of seven children. As a teenager, he worked as a deck hand on the iron ore boats of the Great Lakes. He was soon drafted into the Army, where he served in World War II and wa

s awarded a Purple Heart during the European campaign.

Buck attended Ohio State University, where he majored in radio speech and minored in Spanish and crafted his play-by-play skills broadcasting Ohio State basketball games. After college, he spent the 1953 season as voice of the International League (AAA baseball) Rochester (N.Y.) Red Wings on WHEC (AM). His work there drew the attention of the Wings’ parent club at the time, the St. Louis Cardinals, and earned him an invitation to join the Cardinals’ broadcast team in St. Louis the following season.

Buck started broadcasting Cardinals games for KMOX radio in 1954, teaming with Harry Caray, Milo Hamilton (1954), and Joe Garagiola (from 1955). After Caray was fired by the Cardinals following the 1969 season, Buck ascended to the team’s lead play-by-play role. Buck teamed with ex-Yankees and Pirates announcer Jim Woods in 1970–71. In 1972, retired Cardinals third baseman Mike Shannon joined Buck in the broadcast booth, beginning a 28-year partnership. On Cardinals broadcasts, Buck routinely punctuated St. Louis victories with the expression, “That’s a winner!” Buck was well respected in the St. Louis community, where he lived and regularly volunteered time to host numerous charity events.

Buck also broadcast football. In 1963, he began calling National Football League games, including the famous “Ice Bowl” championship game in 1967 between the Dallas Cowboys and Green Bay Packers, played in sub-zero temperatures in Green Bay. He served as the radio voice of Monday Night Football with Hank Stram for two decades. In addition to MNF, Buck called numerous playoff games for CBS Radio, including 17 Super Bowls. The Pro Football Hall of Fame presented Buck with its Pete Rozelle Radio-Television Award in 1996.

While much better known for his baseball and football commentary, Jack Buck was also the original voice of the St. Louis Blues of the National Hockey League. Buck was paired with Jay Randolph and Gus Kyle on the broadcasts and covered the 1968 Stanley Cup Finals on St. Louis radio. He was succeeded after one season by another St. Louis broadcasting legend, Dan Kelly.

Buck also broadcast for the St. Louis Hawks and Rochester Royals of the National Basketball Association, and called professional boxing, wrestling, and bowling at various times in his career.