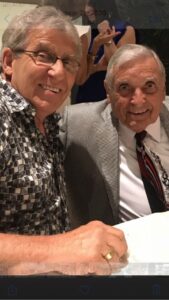 The Gundaker family has been a part of the St. Louis motorsports scene for almost fifty years. Kevin Gundaker started his racing career back in 1973 at Tri-City Speedway which he now owns along with his wife Tammy and dad Gordon. Kevin’s racing career included hundreds of victories and earned him a place in the National Dirt Late Model Hall of Fame in 2011.

After being a major supporter of Kevin’s racing career, he and his father Gordon joined together in January 2005, formed G&G Motorsports and purchased Tri-City Speedway in Granite City, IL. When they purchased the track, most of the facilities were old and run down, but they have modernized it into one of the nicest dirt racing facilities in the Midwest.

What makes Tri City Speedway even more of a special place is the family operated business and partnership of Gordon & Kevin. Gordon is also well known is the St. Louis area over the past 60 years for their family owned Real Estate business.

Under ownership of Gordon & Kevin Gundaker, Tri-City Speedway was reconfigured in 2007 to a 3/8-mile oval. Inside of that is a new surface, a 1/5-mile for Outlaw karts & Go-Karts. 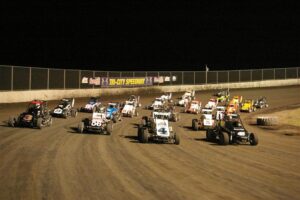 Along with new concession buildings and restrooms, they took on the task of building an entirely new speedway. One of which today is considered one of the top 10 dirt tracks in the country.

Tri-City Speedway not only supports the weekly racers, but they also host events with most of the premier touring series in dirt racing including the Lucas Oil Late Model Series, World of Outlaw Late Model Series, World of Outlaw Sprint Car Series, American Sprint Car Series, USAC National Midgets and the Midwest Late Model Association. Many which are Televised. Tri-City Speedway draws thousands of fans for these events from all around the country which contributes a lot to the area’s economy.

Tri City Speedway is known for it’s family atmosphere. The Gundaker’s also take care of the kids when it comes to racing. Along with having a large playground at the track, they host several Power Wheel races each year allowing young kids to get the excitement of racing their battery powered machines. They also built a small track out near the front of their property for kids that race quarter midgets. They host everything from local to national quarter midget events often bringing in excess of 150 kids into town to compete.