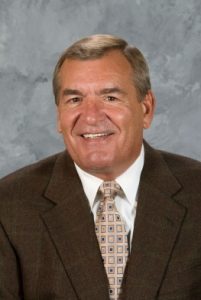 Bob Plager, along with his brother Barclay, had a profound impact on the birth of the St. Louis Blues. Rock solid on defense and among the fiercest competitors in all of hockey, Bob Plager became a local legend and a loyal ambassador of hockey in the community.

As a player, Bob lived for unity and team play. If someone tried to take advantage of a teammate, you could bet he’d have to answer to a Plager or two or three — brother Billy also played four seasons in St. Louis — before the game ended.

“Number 5 in your program, Number 1 in your hearts” was the self-proclaimed motto of Bob Plager. He came to the Blues from the New York Rangers in 1967 and  spent 10 seasons on defense before turning to coaching and scouting. He started his 33rd season with the club in 2000, the longest continuous tenure of anyone in the organization. 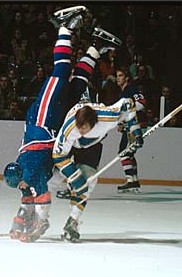 Bob Plager was universally loved by the hockey-crazed fans who filled the St. Louis Arena in the late 1960s and early 1970s. His no-holds-barred play delighted fans, who sang “When the Blues Come Marching In” in those early years. “We’d hear the fans singing and the hair on the back of your neck would stand up,” recalled brother Barclay of the early days.

The Plager brothers were key elements to the Blues’ three consecutive trips to the Stanley Cup finals between 1967 and 1970 — the first three years of the franchise. Along with Hall of Famer Doug Harvey, tough guy Noel Picard and steady Al Arbour, the Blues were talented and deep on defense. They took great pride in keeping opposing offensive players at bay. “We did anything to protect the goaltender,” recalled Bob Plager. “The greatest time for us was the year we won the Vezina Trophy (in 1969). Glenn Hall and Jacques Plante were in goal and we only allowed 157 goals. That record will probably never be broken. Winning the Vezina was the finest reward anyone could get.”

Bob was a savage hitter and fiery competitor. He was plagued by injuries early in his career and was the master of the hip check. He never took any lip from opponents during an era when tough players were the rule, rather than the exception. Al Arbour, a close friend of the Plager brothers through the years, praised Bob’s ability to block shots. “But he was also one of the best body checkers. It’s a lost art, the way he used to hit guys,” recalls Arbour of Plager’s patented hip checks. “He’d throw his hip into someone and they’d go flying.”

In 615 games with the Blues, Bob had 20 goals and 146 points. But aside from the legendary Bobby Orr, defensemen weren’t employed for their offensive prowess.