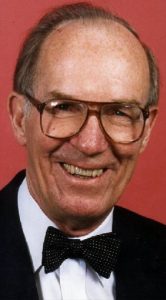 Bob Broeg was synonymous with sports in St. Louis. He enjoyed writing about his beloved University of Missouri Tigers football and was a long-time baseball writer, covering the St. Louis Browns and Cardinals for the St. Louis Post-Dispatch for more years than anyone can remember before he became the newspaper’s sports editor.

Broeg joined the Post-Dispatch in 1945, covering the old St. Louis Browns at Sportsman’s Park, and was shifted to covering the baseball Cardinals a year later. In 1985, after bypass surgery, Broeg was told to retire but never did. He continued to contribute occasional columns and also wrote for The Sporting News. Many around the country knew of Broeg’s work through The Sporting News.

The man known as “B.B.” is said to have written more for the Post-Dispatch than any other writer in the paper’s history, the newspaper’s former managing editor, David Lipman, told the Post-Dispatch.

Broeg came up with the nickname for Stan Musial after he was told that Brooklyn fans would murmur “here comes the man” whenever Musial came to bat at Ebbets Field, according to the Washington Post.

The Post also credited Broeg with playing a role in one of baseball’s most celebrated stunts in 1951. Broeg was having a few beers with then St. Louis Browns owner Bill Veeck. The owner, ever the showman, told Broeg that he was going to use a midget (Eddie Gaedel) as a pinch-hitter during the next day doubleheader. Broeg advised the newspaper’s photographer to make sure he was in position for the famous photo of the 3-foot-7 Gaedel taking the at-bat for the Browns leading off in 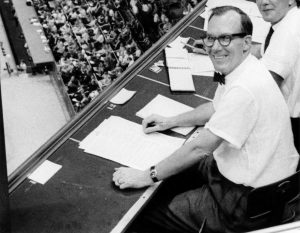 the second game of the doubleheader. Gaedel promptly walked on four pitches.

Broeg also covered University of Missouri football for many years.

Ted Williams reportedly would often call Broeg at home with a question, needing to search through the baseball encyclopedia stored in Broeg’s memory. The gregarious Broeg could even succeed in warming up the notoriously cold Joe DiMaggio, who always loosened his tie and personality when sitting down to talk baseball with B.B. Of course, Stan Musial wasn’t “The Man” until Broeg picked up on the murmurs of the crowd in Brooklyn and gave Stan the world-famous nickname.

Broeg wasn’t some self-serving crusader, but as an icon he used his clout in important ways. He helped devise, and successfully pushed for, the first pension plan for veteran major-league league players. He successfully championed the Hall of Fame causes of Cardinals Red Schoendienst, Enos Slaughter and Chick Hafey (among others).

And from his post in the center of the nation, Broeg represented St. Louis with authority and distinction, for years writing commentaries and stories for national publications such as The Sporting News and The Saturday Evening Post. Even in those days, the New York writers tried to bully their way into power, but St. Louis was never going to be some forgotten flyover country as long as Broeg had that overworked typewriter at his fingertips.

Broeg also wrote some 20 sports books, including “Redbirds: A Century of Cardinals’ Baseball,” “The 100 Greatest Moments in St. Louis Sports,” and his autobiography, “Bob Broeg: Memories of a Hall of Fame Sportswriter.”

In addition, he helped author books such as “The Life of Helen Stephens: The Fulton Flash,” “Jack Buck: ‘That’s a Winner,’” “Ol’ Mizzou: A Story of Missouri Football,” and “Superstars of Baseball: Their Lives, Their Loves , Their Laughs, Their Laments.”

Broeg was voted into the writer’s wing of baseball Hall of Fame in 1979.