Al Hrabosky’s unique antics on the mound may just be as well remembered as his pitching feats for the St. Louis Cardinals. But whether it was his career in baseball or his opinions in the broadcast booth for the Redbirds on the Fox Sports Network, “The Mad Hungarian” had a style that could only be described as “unique.”

Hrabosky became a favorite of the St. Louis fans because of his frolicking on the mound, like staring down opposing batters with his vicious gaze and talking to himself before storming the mound for each pitch. During his time with the Cardinals, the California native delighted the fans with his antics around the pitching rubber. Between each pitch he would turn his back to the batter, walk towards second base, vigorously rub the ball between his palms several times, take a deep breath, and pound the ball into his mitt. He would then storm back to the mound, staring down the batter. Although the crowd would roar in delight, most batters were not fond of the pitcher’s routine.

“Hungo” was originally drafted by the Minnesota Twins in the 11th round of the 1967 amateur draft, but did not sign with the club. Two years later the Cardinals made him their first-round (19th overall) choice. Within a year, at the age of 20, he made his Major League debut.

Hrabosky had arguably his best year in 1975 when he led the National League in saves with a career best 22 and won the Sporting News “NL Fireman of the Year” award. Another aspect that bolstered his affection with the fans was when 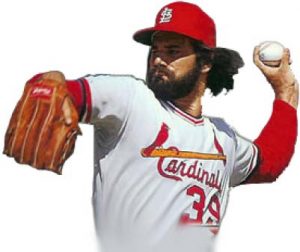 he enhanced his menacing appearance with long hair and a Fu Manchu mustache. However, when Vern Rapp became the Cardinals manager in 1977, Hrabosky had to cut his hair and shave the mustache.

After eight seasons in St. Louis, the Cardinals traded Hrabosky to the Kansas City Royals in a swap of closers for Mark Littell. Following just two years with the Royals, he signed with the Atlanta Braves and later signed with the Chicago White Sox during spring training in 1983. However, he retired before the season began.

Following his playing career, Hrabosky brought his frank style to the airwaves, providing color commentary for Cardinals games since 1985. He has been with Fox Sports Midwest since 1997. Hrabosky sometimes is in the booth as an analyst, other times he’s in the studio providing commentary on pregame and post-game shows.