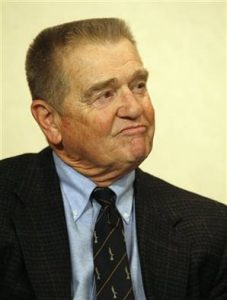 His playing career is probably as unfamiliar to most people as his given name: Dorrel Norman Elvert Herzog. But the man who gave the game “Whiteyball” is a familiar figure to baseball fans everywhere, and one whose innovative managerial strategy made him a giant of his era and one of the most successful managers the game has seen.

After he became a successful manager, the self-deprecating Herzog liked to joke that baseball had been good to him since he quit trying to play it.

Herzog had the respect of his players, but it was clear he was the boss, not their pal. “I’m not buddy-buddy with the players. If they need a buddy, let them buy a dog,” he said. When asked about his team’s prospects one spring, Herzog replied: “We need just two players to be a contender: Babe Ruth and Sandy Koufax.” 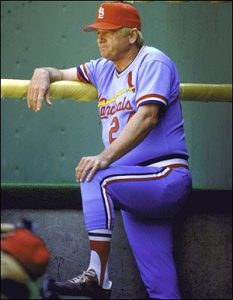 His years as a player and his exceptional mind and knowledge of the game made Herzog a natural to go into managing, but his first job was as a coach and scout. He was named director of player development for the Mets in 1967, a position he held for six years while honing the skills that would make him a shrewd evaluator of talent.

In his first managerial job with the Texas Rangers in 1973, Herzog lasted one season as the team posted a 47-91 record. After a brief stint with the California Angels in 1974, Herzog managed the Kansas City Royals, where his teams won three consecutive American League West Division titles, and then came to St. Louis, where he piloted the Cardinals to the 1982 World Series title. He also won three National League pennants with St. Louis.

Herzog’s teams stressed pitching, speed and defense. With the advent of artificial surfaces and large ballparks, Herzog recognized the value of speed and built lineups that utilized it. Most teams were drawn to power hitters, but Herzog’s lineups, other than George Brett in Kansas City or a Jack Clark in St. Louis, didn’t have much power. They ran early and they ran often. Asked once why one of his players stole a base late in the game with his team leading by six runs, the Herzog was quick with his reply: “My guys will stop stealing bases if their guys will stop hitting home runs.” His teams went full speed ahead from first out to last. The running style of play kept pressure on opposing teams, often forcing mistakes and allowing Herzog’s teams to capitalize.

Herzog, who also served as general manager during his tenure in St. Louis. He was one of the first to recognize the importance of on-base percentage and pursued players who could consistently get on base even if they didn’t have a lot of power. His skill at seeing value where others did not enabled him to build winners in small markets where the financial limitations were greater than many of the organizations his teams competed against.

The “White Rat,” as he was affectioinally known, helped shape the careers of such talents as Brett, Clark, Willie McGee, Ozzie Smith and Frank White. Herzog was a three-time winner of the Manager of the Year Award (1976, 1982, 1985), and in 1982 was also named Executive of the Year. He managed six division winners and compiled a career record of 1,281-1,115 as manager. He was named Sports Illustrated’s Manager of the Decade for the 1980s.