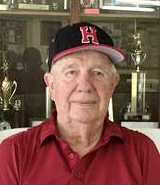 Wayne Wirz has a lifelong love of amateur baseball, specifically American Legion ball. And it continues to this day. That’s why Wirz, 88, of Highland, is the recipient of the 2022 Metro Legends Award from the St. Louis Sports Hall of Fame.

Wirz love of baseball and involvement in it covers more than six decades when he first began managing in the Highland Khoury League in the early 1960s. Then, the Highland native started the community’s first American Legion program in 1965. More than 55 years later, the Highland Lee Iten Post 439 remains a player in Southwestern Illinois summer baseball competition. It’s a member of the District 22 League that once included powerhouse teams from Alton, Belleville, Collinsville, Edwardsville and Granite City, among other area communities. Players are high school and college ages.

A longtime Highland manager, Wirz now serves as the team’s general manager. He also was the District 22 chairman for 15 years and is known throughout the state as one of the biggest proponents of Legion baseball. He has served as a member of the Highland American Legion since 1959.

“I’ve enjoyed it and working with a lot of players through the years,” Wirz said. He has influenced and impacted hundreds of players in his life of giving his all to baseball. “At one time, I was working in a heating and air conditioning company with my dad,” Wirz said. Then for years, he worked for Macy’s in the employee benefits department. Yet he yearned for more and guiding young baseball players proved to be his calling.

“The first year, we had all college guys,” said Wirz, recalling players Dean Burk, John Duft, John Spengel, Larry Ward and Mike Weber. Burk, a hard throwing 6-foot-6 right-hander, was a first-round draft choice of the Chicago Cubs in the 1966 MLB Draft. Duft and Spengel went on to play sports at the University of Missouri.

The best was yet to come for Wirz and Highland American Legion baseball. Post 439 won the state championship in 1973 and finished second in 1974. Highland also had players from Troy, Breese, Greenville, Staunton, Trenton and Pocahontas along the way.  Dan Koishor, Mike Young, Randy Manley, Billy Bircher and Steve Weiss were some of Highland’s key players on its state championship squad.

“We had good players and in general, the players who played here accepted what happens,” Wirz said. “We had a lot of good kids and they played hard. “They wanted to win.”

So did Wirz. He still wants to put a winning stamp on the Highland program. “We played hard, and we played aggressively,” he said. “We played a lot of small ball and our teams always wanted to run. We relied a lot on pitching and defense.”

He said many of the Highland players weren’t exclusively baseball players. They also made their marks in other sports. “Most of these kids we had through the years played multiple sports,” Wirz said, pointing to basketball and football competition. “The players were diversified.”

He couldn’t stress enough how much commitment and dedication the Highland players put into the successful program. “I’m very proud of them for the good work ethics they have formed.” Part of that work ethic was built in, Wirz said. Highland is a tight-knit community, especially for sports. “We’ve had great parents, great kids and a great community,” he stressed. “We couldn’t have done it without the community support, people fund-raising and their enthusiasm.”