In 1961 in the Monroe County town of Waterloo, Illinois, 25-year-old Vern Moehrs managed his first game for the Waterloo Buds, which in 2007 became the Waterloo Millers in what is now the Mon-Clair Baseball League. Sixty years late 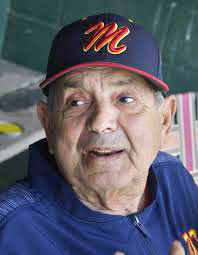 r, Moehrs is still calling the shots for the Waterloo Millers.

At age 85, Moehrs uses a cane to help get around and he doesn’t coach third base or hit infield fungos before the games, but he can still be heard barking at umpires from the dugout. Baseball has been a big part Moehrs’ life and, by extension, to his wife Lucy, his daughter, Gina, and his son, Clay. That passion still burns.

Vern will tell you that managing his son, Clay, for 18 years was one of his favorite things about his managerial career. Clay holds the Waterloo Buds-Millers record for most career stolen bases, 230.

While most of Moehrs’ baseball life came in Waterloo, the love of baseball goes back to growing up in Renault, IL. “In the summer we would play baseball from early in the morning until sunset sometimes and it didn’t matter if we had four or if we had had 10 guys playing. If we only had four, we would play two-on-two,” Moehrs said. “We would take our thermos jugs of water and maybe a sandwich or two and we would play all day. “Kids don’t do that today. They don’t know what they’re missing, either.”

“I love the game of baseball. It’s a wonderful sport,’’ Moehrs said. “This really didn’t have an effect on me until I would say last year and again this year, but I really miss coaching third base and hitting infield practice. I don’t feel like I’m in the game as much as I used to be.

“… I don’t think there is as much dedication as there used to be. Our league is a very young league right now and there is a lot of turnover. I used to know almost everybody on all the rosters. Now I don’t know hardly anybody. I guess I’m getting old.’’

“We won 42 divisional championships, but we won 29 straight,’’ Moehrs said. “That was the amazing part. We had a lot of great players and great teams over the years. And memories … unbelievable.” Of the 23 postseason championship teams, several stand out. But none was better than the 1998 team which finished 41-1.

How appropriate it is that Vern Moehrs receives the Metro Legends Award since he is literally a legend in Waterloo and the Mon-Clair Baseball League! His license plate echoes that: 2 A LGND. The number 2 represents the number he wears on the back of his uniform.

Vern started playing for the Waterloo team in 1952 when he was 17 years old. Nine years later, he became the team’s player-manager. In total, Vern’s teams have won 2013 games and lost 532. Next year, his 60th managing the same team, he will add to those totals.