Tony Van Zant is arguably the greatest high school football player in St. Louis history. After his senior season at Hazelwood Central in 1985, Parade Magazine named him the National Player of the Year. Van Zant had offers from Michigan, Oklahoma, Notre Dame, Nebraska, Miami, Arkansas, USC, and countless others.

Barry Sanders was in that class and not as highly though of as Tony. Van Zant rushed for 2,736 yards and 36 touchdowns his senior year. He led the Hawks to the state championship and a 14-0 record. 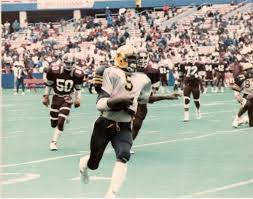 For his career, Van Zant rushed for 6,128 yards and a national record of 91 touchdowns. He could have gone anywhere in the country for college. He chose Mizzou. Van Zant said, “It was something I wanted to do for my mom. She had moved enough. I said I will stay home and she can see me play.”

Unfortunately, the area never got to see the real Tony Van Zant at Mizzou. Two devastating knee injuries took away his explosive speed. However, if you saw Tony play in high school, you knew you were witnessing greatness.

Tony now resides in Jefferson City and teaches at Jefferson City High School. He is engaged to Cassandra Wilson. Tony has two children of his own: Beanna and Aquil. Cassandra has three children: Elijah, Jeremiah and Sarae.