Tony Perkins is the son of Larry and Carolyn Perkins and was raised in Rock Island, Illinois where he received various baseball honors at Rock Island Public High School.

After High School, Tony spent a year at Dickinson State College in North Dakota, where he played both football and baseball. After the year in North Dakota, Perkins transferred to Northeast Missouri State University where he played on the baseball team for three years and spent one year as a graduate assistant coach. He graduated from NMSU in 1984 with his BSE in physical education.

Perkins earned his masters in educational administration from the University of Missouri at St. Louis in 1996. After graduation, Tony took his first job at Brashear High School in Brashear, MO. At Brashear the baseball teams went 44-24 in 3 years under his guidance. 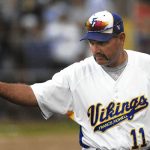 Tony was selected by the BCA as the Midwest Region Coach of the Year in 2011 and 2013. This region covers 7 states. He, along with his assistants, Terry Oetting, Mike Janes, Justin Schmidt, and Rick Regina, have had the pleasure of coaching in the Missouri High School Baseball Coaches Association All-Star Series over the years.

Tony spoke at the MHSBCA clinic in 1999 on Howell’s evaluation process and also in 2003 on Promoting your Player and your Program. He also spoke in 2012 and 2014 at the MHSBCA, 2014 on Summer Choices and the Recruiting process. He also spoke at the National High School Baseball Coaches Clinic held in Chicago in 2008 on Practice Organization. He was elected and served as the President elect of the MHSBCA from 2000-2001, and served as President from 2001-2003.

Perkins is married to the very understanding and supportive, Tracey Perkins, they have 4 boys, Zac, Nic, and twins Justin and Ryan.