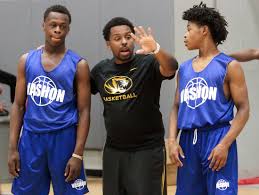 Tony Irons was a four-year letterman in basketball while attending Lutheran High School North from 1998-2002. During that time he helped lead the Crusaders to the 2002 Missouri Class 2 championship. It was the first championship in school history.

Upon graduating from North, Tony attended College of the Ozarks on a basketball scholarship. While there, he was an all-conference performer, captaining the Bobcats to their first ever NAIA national championship tournament in his senior year.

In the fall of 2008, Irons was hired as the physical education teacher/head boy’s basketball coach at Imagine College Preparatory High School. During his three year tenure at Imagine, Tony led the Bears to two district titles and a final four appearance, both firsts in the school’s history.

After Imagine, he transitioned to become the head boy’s basketball coach and physical education teacher at Madison College Prep High School. In his three year tenure at Madison Prep, the Bears won the Missouri Class 3 State championship in the school’s inaugural year, followed by consecutive trips to the final four.

Tony is currently the athletic director, physical education teacher and head boy’s basketball coach at Vashon High School, where his team has compiled a record of 74-13, winning back to back Missouri Class 4 state titles – 2016,2017.