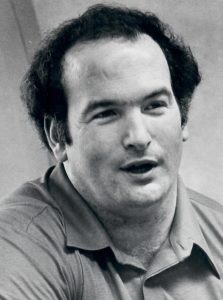 There are Olympic dreams that are crushed through competition and those dashed by circumstances not under their control. Tom Stock’s Olympic dreams unfortunately fell in the latter category.

The football and shot put standout from Belleville West High School, took up weightlifting in 1970 at age 18 and became the U.S. super-heavyweight champion in 1978, 1979 and 1980. He won three gold medals at the Pan American games in 1979 and had his sites set on the 1980 Moscow Olympics. That’s

when his dream fell apart.

The U.S., spurred by President Jimmy Carter, boycotted those Summer Olympics to protest the Soviet invasion of Afghanistan. Some 66 countries that were invited to participate did not attend the 1980 Olympics. Unfortunately, Stock was one of those affected.

Stock was a member of the University of Tennessee’s track team, and became a two-time indoor and outdoor Southeastern Conference champion. He thought of a career in pro football, but instead turned to weightlifting. He had the size, strength and agility, but the sport wasn’t lucrative. Still he persisted.

At age 27, however, he was hired by Anheuser-Busch, which gave him the freedom to work half days and properly train the rest of the day. Soon his success at the Pan-Am games followed. He had personal bests of 374 pounds in the snatch, tied his personal best for the clean and jerk (473 pounds) and set a Games record with his total of 847 pounds.

He had his goal set for a weights’ medal at the ’80 Olympics, something no American had never achieved. But he never got the chance.