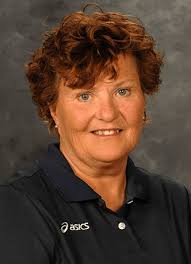 In all, Clemens served as the head coach at Washington University for 14 years where she was a three-time AVCA Coach of the Year (1991, 1994, 1996) and U.S. Olympic Committee National Coach of the Year (1997). Before taking over at Washington U. she served as the head coach at Incarnate Word Academy high school in St. Louis, where she amassed a 155-15 record with three Missouri state championships – in 1982, 1983 and 1984. 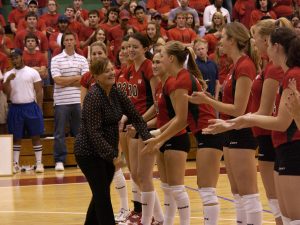 In 1995, Clemens was inducted to her alma mater Truman State (formerly Northeast Missouri State in Kirksville, Mo.) Hall of Fame. But it wasn’t all fun and games for her. “As a youngster I was once an avid, competitive athlete,” Clemens said. “But, I became deathly ill with a lung condition and then, steroid myopathy. I couldn’t walk. After a year in a wheelchair in full time rehab and a year on forearm crutches, I started walking with trekking poles and then without. “I was pretty scared to try running but I did and it brought me joy and health. I had averaged over 120 days a year in the hospital for more than six years back then.”

Aside from coaching, Clemens served on the AVCA All-America Committee as the chair of the South Region and was an AVCA poll voter. She also served as the Division III representative on the AVCA Board of Directors from 1990-93. During her time on the board, the AVCA instituted the Division III national poll to provide publicity for schools playing at the Division III level. She was inducted into the AVCA Hall of Fame in 2004.