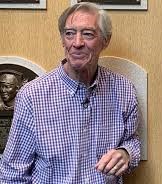 Ted Simmons will always be regarded as one of the baseball’s top switch-hitting catchers and one of the St. Louis Cardinals best-hitting catchers of all-time. In 13 seasons with the Redbirds, Simmons posted a .298 average and slugged 172 homers, including a career-high 26 in 1979.

Known as “Simba” for his long locks, Simmons often played hurt and always played hard. An average defensive player, Simmons struck fear in the hearts of opposing pitchers.  Seven times he batted above .300, six times he hit 20 or more home runs and eight times he exceeded 90 RBI. He hit home runs from each side of the plate in a game three times and established a National League record by hitting 182 home runs as a switch-hitter.

For his career, which included five seasons with the American League’s Milwaukee Brewers, Simmons belted 248 home runs and was an eight-time All-Star. Even though Simmons only stole 21 bases in his remarkable career, he was a smart base runner who hit 483 doubles (amassing more than 30 doubles on nine different occasions) and  47 triples. In fact, Simmons’ hitting prowess was so well respected that he twice led the National League in intentional walks with 19 in 1976 and 25 in 1977. 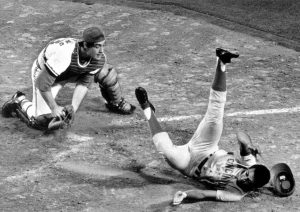 Simmons had just turned 19 when he played his first games for the Cardinals, who were grooming him to replace popular veteran Tim McCarver at catcher.  After annihilating minor league pitching with power and average for three seasons, Simmons became the regular St. Louis catcher for the next 11 seasons. His career with the Cardinals ended in 1981 when he was dealt to the Milwaukee Brewers with pitchers Rollie Fingers and Pete Vuckovich for outfielders Sixto Lezcano and David Green, and pitchers Dave LaPoint and Lary Sorensen.

Simmons helped the Brewers win the second-half American League East title in the strike-split 1981 season and blasted a crucial two-run homer in Game 3 of the division playoff, helping the Brewers stave off elimination. The following year, Simmons helped Milwaukee reach the World Series, where they met the Cardinals. Simmons hit home runs in each of the first two games for the Brewers against his former teammates. His greatest clutch performance may have come in 1983 for Milwaukee, when he drove in 108 runs, despite hitting just 13 home runs. He closed out his career in 1986-88 as a member of the Atlanta Braves’ utility men’s self-dubbed Bomb Squad. He played first base, catcher and third base for the Braves and was a valuable pinch-hitter.

In October 1988, Simmons came back to the Cardinals to serve as director of player development, working under longtime friend and teammate Dal Maxville, then the St. Louis general manager.

Overall, the switch-hitting catcher spent 21 years in the big leagues, and retired with more RBIs than Cincinnati Hall of Famer Johnny Bench, more runs scored than Hall of Famer Gary Carter, more hits than Hall of Famer Carlton Fisk, and a higher batting average than Hall of Famer Yogi Berra. Many believe Simmons’ less than stellar reputation defensively has kept him from joining his peers in the Hall of Fame. Offensively, Simmons ranked among the game’s best and most consistent hitters. His 2,472 career hits are the most ever by a player who played primarily as a catcher. He batted .300 or higher seven times and was consistently among the league leaders in hits, doubles and intentional walks.