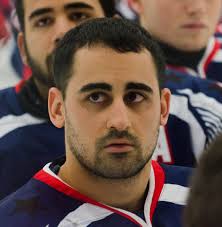 The final statistic for the United States sled hockey team was striking: Team USA 19 goals for, 0 goals against. At the 2010 Paralympic games, goaltender Steve Cash turned in, not one, but five consecutive shutouts in leading the U.S. team to a gold medal.

Team USA scored 19 goals while its competition couldn’t get one puck past Cash. Not one. Cash faced challengers with power play opportunities, breakaways and even a penalty shot from Team Japan during the gold medal game.

Cash recorded a feat no other Paralympic goaltender had ever accomplished. He turned away all 33 shots, went 5-0-0-0 in the tournament and was named the event’s top goalie. The U.S. team became the first sled hockey team in Paralympic history to win a second gold and not allow a goal.

Hockey Championships in Nagano City. For the year, Cash posted a 0.80 goals-against average.

In 2009 ESPN awarded him an ESPY as Best Male Athlete with a Disability. The only other Missouri athlete to received an ESPY is former Cardinal Albert Pujols. Cash’s year was capped when the U.S. Olympic Committee named him Paralympic Athlete of the Year.

“It came as a complete shock,” he said. “It’s one of the best feelings I’ve ever had. It’s always an honor to receive an award of that caliber. And it’s something that I had never thought I could achieve.”

At the age of 3, Cash was diagnosed with osteosarcoma in his right knee and had to have his right leg amputated. He was fitted with a prosthetic and learned to walk at the age of four. He has never looked back.

Cash played roller hockey growing up in Overland, but when Disabled Athlete Sports Association (DASA) sled hockey coach Mike Dowling learned of his prosthetic, he asked him to try out. He was 15 when he first got into a sled. He played in his first sled hockey tournament in January 2005 and was asked to try out for USA Hockey that spring.

Cash is well-liked and teaches and supports those who are just beginning their sled hockey careers.