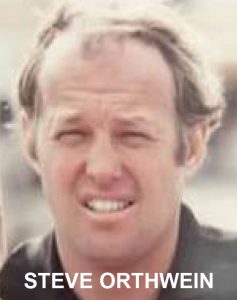 Steve Orthwein has spent much of his life playing and contributing to the sport of polo, not only in St. Louis, but also nationally and internationally. He learned to ride and swing a mallet as a youngster growing up in a family where polo was a way of life. His father, Dolph Orthwein, was captain of the St. Louis squad and taught Steve and his brothers much about horses and the game. Polo was a family endeavor that provided him a great opportunity to learn and love the sport. Steve continued to play polo in college. In 1967 and 1968 he captained the Yale University team to back to back National Intercollegiate Championships. In 1967 he also won his first major USPA tournament, the United States Polo Association National Sixteen Goal, with a St. Louis team.

Throughout the next several decades he competed in many national and international events. In 1969 he was selected to play on a team representing the United States in Pakistan. Steve has also played throughout South America, Europe and in South Africa. He won numerous tournaments and achieved a 6 goal handicap. At one time he was the highest rated amateur player in the U.S. In 1988 he was honored to receive the USPA Hugo Dalmar sportsmanship award.

In the 1970s Steve was first elected captain of the St. Louis Polo Club, a position he held for most of the next 30 years. He is responsible for introducing a number of young St. Louisans to the game and helping to oversee its growth in the region.

As a delegate representing the St. Louis Polo Club, Steve became involved in the United States Polo Association. Serving on a number of USPA committees he worked hard to improve the sport nationally. He served as president of the USPA from 1988 to 1991 and as its chairman from 1991 to 1995. From 2001 until 2010 he was chairman of the National Museum of Polo. He has also served as the U.S. representative to the International Polo Federation (FIP), on its executive committee and is currently zone coordinator for the North American Zone. In 2011 he was honored to be elected into the Polo Hall of Fame.

Today Steve continues to enjoy playing polo in St. Louis with his sons. He is grateful to the community for providing him the opportunity to learn and compete in polo. He is very proud that the St. Louis Polo Club is being recognized this year by the St. Louis Sports Hall of Fame and that his contributions to polo in St. Louis also are being honored.