In high school Steve Atwater was an excellent student as he was named the Scholar Athlete from Lutheran North in the annual recognition for academic excellence by the St. Louis Post-Dispatch. He was also a leader as a member of the Executive Board for Student Council. He was popular with the student body being elected as King at the Homecoming Dance.

While his fame came as a result of his football career, he also played basketball, baseball, and ran track. In football for the Crusaders,  Steve was selected as all-conference and voted the league’s Most Valuable Player as a quarterback. 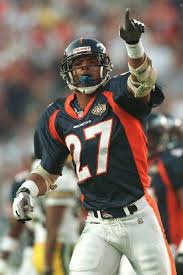 Steve received a full athletic scholarship to the University of Arkansas to play football. He was moved from quarterback to safety for the Razorbacks and currently holds the record at Arkansas with 14 interceptions. He was named to the All-Southwest Conference team for three years and was named an All-American twice.

In 1994 he was named to the Razorback All-Century Team. Steve graduated in 1989 with a B.S. degree in finance and banking. In the East-West Shrine Game in 1989 he was named the Most Valuable Player.

Steve was selected by the Denver Broncos organization in the first round of the 1989 National Football League draft. In his rookie year, he led the team in tackles with 129. He finished his career with more than 1,000 tackles. He also finished second in the NFL Defensive Rookie of the Year voting.

His legendary statistics with the Broncos include:

His advice, “Patience, focus, and hard work will reward you.”