Cork ball’s history is almost as old as professional baseball in St. Louis itself! Apparently it was first played at Mueller’s, a boardinghouse and saloon on the corner of Grand and Greer on the city’s north side where the team’s owner, Chris Von der Ahe, was the saloon-keeper. The story goes that sometime in 1890, one of the Browns’ players pulled the bung out of a keg of beer, carved it into a ball, and began pitching it to a teammate using a broomstick as a bat. Three others played behind him and another served as catcher. 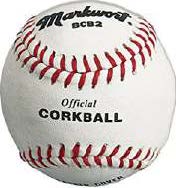 It didn’t take long (perhaps a few busted windows, pint glasses and mirrors) before the game was relegated to cages, which were erected in just about every part of town. Leagues were organized and manufactured “corkball” equipment became commercially available thanks to several local sporting-goods manufacturers, including Rawlings, Wilson, Worth, Leacock, Sisler Hummel, Murson, Proline, Anchor and Markwort.

R.H. Grady is credited as being the first to develop a horsehide-covered, stitched ball, which dates to 1920. Area big league players who played the game as kids Yogi Berra, Joe Garagiola, and Pete Reiser.

Despite its longevity and almost cult-like following in St. Louis, corkball hasn’t spread much across the country. There’s a club in Chicago, and other locations in Illinois. In Jacksonville, Fla., Butch Trucks and Duane Allman of the Allman Brothers Band are known to have played the game as kids.

During World War II, Howard Rackley introduced the game to his fellow servicemen on the deck of the aircraft carrier Bunker Hill, which did a lot to disseminate the game to other parts of the country. But lacking the history and cultural connections, it has struggled to survive. There are four major clubs in St. Louis – Sportsman’s Corkball Club (established 1957); South St. Louis Corkball Club; Lemay (established in 1947), and Gateway (established 1929). Today, corkball is played on open fields with a pitcher, catcher and fielders. These clubs get together at the end of the year and compete in a one-day tournament.

We invite anyone interested to check out our clubs!