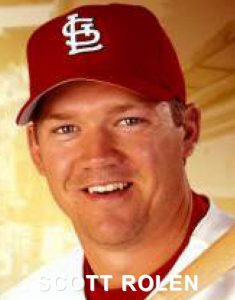 When the Philadelphia Phillies drafted Scott Rolen in 1993, they had a premonition that they had a diamond in the rough. And it didn’t take long for them to discover their gem of a ball player once he reached the Major Leagues in 1996.

All Rolen did was win National League Rookie of the Year honors in 1997, becoming the first Phillie since Dick Allen in 1964 to win the award. In 1998 he won his first of seven Gold Glove awards. Rolen was supposed to be one of the key pieces in the Phillies for years to come. However, claiming that management was not trying hard enough to win, Rolen demanded a trade.

On July 29, 2002, Philadelphia traded Rolen and Doug Nickle to the St. Louis Cardinals for Plácido Polanco, Mike Timlin, and Bud Smith. The Cardinals wanted Rolen to be their cornerstone at the hot corner for years to come. Later that year, the Redbirds gave Rolen an eight-year deal worth $90 million.

Rolen’s 2004 season was arguably one of his best to that point. For much of the season, he led the National League in RBIs, often ranked among the league leaders in most offensive statistics, and had the highest vote total of any player for the All-Star Game. Despite being injured for the last stretch of the season, he finished the year with a career-high .314 batting average, 34 home runs, and 124 RBIs. He finished fourth in the National League MVP voting.

Rolen, along with Albert Pujols and Jim Edmonds earned the nickname “MV3” for their phenomenal 2004 seasons. The 2004 Cardinals won the National League Central Division with 105 wins. Rolen’s two-run home run in the sixth inning won Game 7 of the NLCS over the Houston Astros. However, the Boston Red Sox swept four games against the Cardinals to win the 2004 World Series.

On May 10, 2005, Rolen injured his shoulder in a collision at first base and was placed on the disabled list two days later. He was expected to be out 4–6 weeks. On May 13, he underwent shoulder surgery; an additional MRI revealed a tear in the labrum. He eventually opted to have surgery on his shoulder.

He returned in 2006 and was one of six nominees for the National League Comeback Player of the Year award. He finished 2006 hitting .292, hitting 22 home runs and 95 RBI. Rolen and the Cardinals won the 2006 World Series over the Detroit Tigers. The next year, however, Rolen faced more injury woes. He was placed on the 15-day disabled list on August 31, 2007 because of his recurring left shoulder problems.

On September 11, Rolen had season-ending shoulder surgery “for the removal of scar tissue,” according to a release from the team. Rolen was traded to Toronto in 2008 and finished his career with Cincinnati. Rolen had a career .284 batting average.