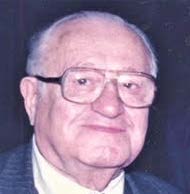 Sam Muchnick’s career draws many comparisons to Pete Rozelle bringing the NFL to prominence. Each was a forward thinker who revolutionized his particular sport. After coming to America in 1912, the Ukrainian-born Muchnick moved to St. Louis, graduated high school, worked as a postal worker and then a newspaper reporter for the St. Louis Times covering the St. Louis Cardinals and the wrestling scene in the 1920s and 30s.

After the St. Louis Star purchased the Times in 1932, Sam aligned himself with one of the region’s top promoters, Tom Packs. Packs liked Sam’s professionalism in reporting. It enhanced wrestling’s style and legitimacy.

Muchnick became a jack of all trades in Packs’ operations, working public relations and finances and eventually handling event bookings. Most importantly, Sam was learning all aspects of wrestling operations.

But after nine years the relationship soured over the amount of a bonus payment Sam expected from a very profitable Joe Louis heavyweight title bout that he helped Packs promote. Muchnick split and began putting together his very own promotions. His first big show was at Kiel Auditorium on December 5, 1945.

Over time, his promotions would be renamed the St. Louis Wrestling Club and be known worldwide.

In 1948, Muchnick and wrestling promoters across the country consolidated their territories into the National Wrestling Alliance.  A year later, Sam took over its presidency and led the sport through the “glory years” of professional wrestling.  Under his 25-year tenure of leadership, the sport became a worldwide phenomenon. It was based out of St. Louis, the wrestling capital of the world.

Muchnick was revered for his honesty and integrity. All wrestlers wanted to work for him. His shows would annually fill Kiel Auditorium 17 to 20 times a year.

When professional wrestling slumped in the late 1950s, Sam revolutionized the sport once more. On a plane ride he sat next to Harold Koplar, the owner of the Chase Park Plaza Hotel.  Koplar was bringing a new television station to the St. Louis airwaves – KPLR-TV. He was looking for programing while Sam was looking to reenergize his sport. Their conversation led to a 25-year marriage with the May 23, 1959, premiere of Wrestling at the Chase.

Through Muchnick’s leadership and guidance, professional wrestling filled arenas and the television airwaves. Muchnick’s final wrestling card was held on January 1, 1982. A crowd of 19,819 packed the Checkerdome for a farewell salute. It was a wrestling event filled with dignitaries and former wrestlers honoring the man who meant so much to the sport. As so many had said before and since, if there had been no Sam Muchnick, professional wrestling never would have risen to become the phenomenon it became then and is today!