Ryan Robertson was not only the best basketball player ever to come out of St. Charles County, but he was one of the best to play in the entire St. Louis metro area.

Robertson enjoyed a historic career at St. Charles West High. From 1992 to 1995, the St. Charles West gym was packed every Friday night to watch this slender 6-foot-5 point guard amaze the crowd with his 3-point shooting, slick ball handling and passing wizardry.

A four-year starter at West, Robertson led the Warriors to their first ever appearance in the Final Four of the Class 4A state tournament in 1994. The Warriors finished in third place that year, but Robertson made his mark with a memorable 33-point performance in an overtime loss to Vashon in the state semifinals.

It was only the beginning for Robertson and state tournament excellence. Robertson brought the Warriors back to the Final Four in 1995 and this time he finished the job as He led West to a 58-51 victory over Vashon to win the
school’s first and only state championship. Robertson scored a game-high 24 points and took over the  championship game with 13 points in the fourth quarter. His three 3-pointers in the closing minutes of the title game are a permanent part of state championship folklore.

Robertson finished his career with more than 2,700 points and 1,100 assists to break future Hall of Famer Jason Kidd’s national prep record for combined points and assists in a career. He was selected to the St. Louis Post-Dispatch All-Metro First Team three consecutive years. 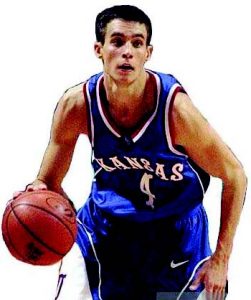 Several major collegiate programs were in the hunt for Robertson’s services, but he eventually chose national powerhouse Kansas, where he went on to enjoy an outstanding four-year career. Robertson played in all 142 games of his career and was a major cog in the Jayhawks winning three consecutive Big 12 regular-season championships, three Big 12 tournament championships while earning four NCAA Tournament berths.

Robertson finished his career at Kansas among the top 20 in several different categories. He dished out 485 assists, 13th on the school’s career list. He also made 40 percent of his 3-pointers, 15th in school history and was seventh in free throw shooting percentage at 80 percent. Robertson finished with 1055 career points.

As a junior, Robertson averaged 6.4 assists per game, which led the Big 12 and was also third in the nation. His 248 assists during that 1998 season was the fourth highest in KU basketball history.

During the 1999 season, Robertson enjoyed his best offensive season as the Jayhawks had to replace All-Americans Paul Pierce and Raef LaFrentz who headed to the National Basketball Association. He averaged 13 points a game to help lead the Jayhawks to another NCAA Tournament berth. In his final game in a Kansas uniform, Robertson scored a career-high 31 points in a narrow loss to No. 1 seed Kentucky in the second
round of the tournament.

Robertson was drafted by the Sacramento Kings in the second round of the NBA Draft in 1999. He finished his professional basketball career playing overseas in the Netherlands and Greece.