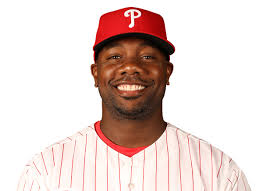 lt shouldn’t have come as any surprise that Ryan Howard was a supreme power hitter for the Philadelphia Phillies once he got to the Major Leagues. After all, the slugger from Lafayette High School in St. Louis and Missouri State University, finished his collegiate career with 50 home runs, 183 runs batted in, and a .335 career batting average in 172 games played. He was the 1999 Missouri Valley Conference Freshman of the Year.

He was selected by the Phillies in the fifth round of the 2001 draft and soared through the Phillies’ minor league system, earning consecutive awards in the Florida State League and Eastern League in 2003 and 2004, respectively. Howard set the single-season home run record for the Reading Phillies, with 37 in 102 games. He was promoted to the Scranton/Wilkes-Barre Red Barons of the Class AAA International League and became just the fifth minor league player since 1956 to hit at least 46 home runs.

Howard, nicknamed “The Big Piece,” spent his entire Major League Baseball career playing for the Philadelphia Phillies, from 2004 to 2016. He is known for being the fastest player in baseball history to reach 1,000 RBIs, 100 home runs, and 200 home runs. Howard also holds numerous Phillies franchise records. He is also tied with Sammy Sosa for the most National League 140-RBI seasons at three and the most National League 130-RBI seasons at   four.

Howard became the Phillies’ everyday first baseman in 2005 when Jim Thome was sidelined for the season with an elbow injury. Howard led all major league rookies with 22 home runs average and 63 RBIs in just 312 at-bats in 88 games. He finished his rookie season with 17 doubles, two triples, 52 runs scored, and 63 runs batted in as the Phillies battled the Houston Astros for the NL wild card until getting eliminated on the last day of the season.

Howard was outstanding in 2006, finishing with a .313 batting average, 58 home runs (winning the NL home run title), and 149 runs batted in to capture the NL MVP Award. Howard was also named by his fellow major league players as the Player of the Year and the National League Outstanding Position Player. He also was named to the All-Star Game, winning the Home Run Derby. He was named to both the 2009 and 2010 All-Star Games.

After his retirement, Howard wrote six children’s books with co-authors Erwin Madrid and his wife, Krystle Howard, published by Scholastic.