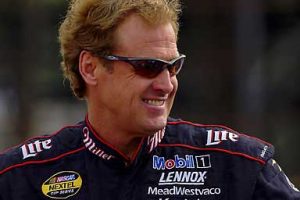 One of the most consistent stock car stars of the 1980s and 1990s, Fenton, Mo., native Rusty Wallace became famous as the best short rack driver of his era, but he was really top-notch everywhere. And, by the time he left the NASCAR circuit, he certainly left his mark on the racing world. His 55 series victories puts him eighth on the all-time win list and as the 1989 NASCAR NEXTEL Cup Champion he could easily say that he had conquered all that NASCAR had to offer.

Russell “Rusty” William Wallace Jr. and his racing brothers, Kenny and Mike, were brought up and surrounded by race cars. Their father, Russell Wallace Jr., raced on weekends in Granite City, Ill.; Valley Park, Mo.; and Rolla, Mo., and the boys often served on his crew. With that background, Rusty wanted to race. But even after he obtained his driver’s license, he wasn’t old enough to compete on the track 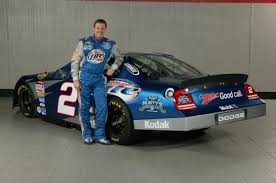 ; that is, until his mother went to court to get permission for him to race.

He won his debut heat race at Lake Hill Speedway in Valley Park, but didn’t finish the feature ace when he ran out of gas. “I got so excited about winning my first race, I just forgot to put gas in the car for the big race,” he was quoted as saying. But here was no holding him back after that. Over the next five years he won more than 200 aces around the Midwest. He then joined the United States Auto Club (USAC) stock car division circuit in 1979, won five races and took the USAC “Rookie of he Year” award.

Wallace, who once worked for his family’s vacu- um-cleaner repair shop, ran his first race in the NASCAR Sprint Cup Series in 1980 at Atlanta, finish- ng second, and in 1983 he won the American Speed Association (ASA) AC Delco Challenge Series championship competing against other up-and-coming NASCAR drivers.

On the April 6, 1986, Rusty won his first NASCAR event at the Bristol Motor Speedway and he had victories at Watkins Glen and Riverside alongside his first pole series at Michigan in June at Michigan International Speedway. He captured six races in 1988 and finished runner up behind Bill Elliott in the final NASCAR Winston Cup standings race. The next season, he won the NASCAR final, finishing just ahead of legendary driver Dale Earnhardt. From 1986 until 2002 Wallace won at least one race every year. His last Nextel Cup victory came in 2004 at Martinsville Speedway in Virginia, where he won the Advance Auto Parts 500.

Upon his retirement from racing, he was bestowed with Delaware’s Order of the First State and North Carolina’s Order of the Long Leaf Pine. He later became a racing analyst for the ABC and ESPN networks.