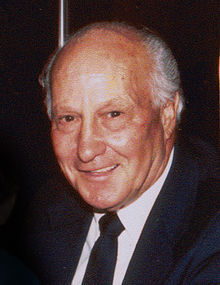 A powerful right-handed slugger, Roy Sievers, in 1949, was the first player ever to be named American League Rookie of the Year and the last from the old St. Louis Browns to achieve major recognition. He was a big slugger whose 318 career homers understate his true power due to the fact that he played for six years during his prime in spacious Griffith Park in Washington. The outfielder/first baseman clubbed 20 or more homers in nine of his 17 major league seasons and 19 homers another year.

Roy Edward Sievers starred in baseball and basketball while attending Beaumont High School in St. Louis, only a few blocks from Sportsman’s Park. He reportedly signed with the old St. Louis Browns for a pair of spikes. He moved to Baltimore when the Browns transferred there, but after two injury-prone seasons, the Orioles traded him to the Washington Senators for Gil Coan. It was in Washington that Sievers became a bonafide star. 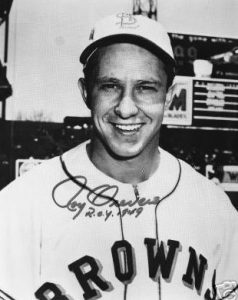 In Washington, he became a fan favorite, driving in 100 or more runs and playing at least 144 games each year from 1954 through 1958. In 1957, though his club came in last, Sievers led the A.L. with 42 home runs and became the first Senator to win the RBI crown (114) since Goose Goslin in 1924. He finished third in the MVP balloting, behind only Mickey Mantle and Ted Williams. He tied an A.L. record in July and August of 1957 by homering in six consecutive contests – a mark since eclipsed by Don Mattingly.

One of Sievers’ biggest fans was then-Vice President Richard Nixon. In fact, when Nixon returned from debating Khrushchev in Moscow, he sent word that he wanted Sievers to meet him at the airport. While assorted dignitaries waited for the future President, Nixon talked baseball with the player affec- tionately known as “The Squirrel.” In the 1957 season, in which Sievers led the A.L. in homers, RBIs, total bases, and extra-base hits, the Nationals held a day for him on September 23. Nixon served as the master of ceremonies. Sievers was presented with a new Mercury station wagon, a television set, golf clubs, tape recorder, wristwatch, and free haircuts for a year. “This is the most memorable night of my life,” Sievers said graciously.

However, in 1960 he was traded to the Chicago White Sox and the following year he was dealt to the Philadelphia Phillies, where in 1963, he hit his 300th career home run. In July of 1964, Sievers was purchased by the Washington Senators from Philadelphia. He remained productive through 1963 with the Phillies; that year, he matched Jimmie Foxx as the only player to pinch hit grand slams in both the A.L. and N.L. In mid-1964 he was sold to the Senators. The Senators released Sievers in 1965, ending his baseball-playing career at age 38.

Sievers coached for the Cincinnati Reds in 1966 and then managed in the minors for a few years after leaving the majors. Sievers also appeared as the swinging double for actor Tab Hunter in distance shots in the 1958 movie “Damn Yankees.” Hunt’s character, Joe Hardy, was left-handed, so the right-handed Sievers was outfitted with a mirror image Nats uniform and the film was reversed in production.

Sievers has been a hit in numerous old-timers games, clad in a replica St. Louis Browns uniform. In fact, he has received many offers to buy the uniform, which was a gift from Bing Devine. He still attends the annual St. Louis Browns reunions.