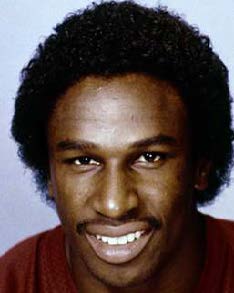 When Roy Green came to the St. Louis/Phoenix Football Cardinals in 1979, it seemed like he rarely left the field. That’s because he was all over – on offense, defense and special teams.

Quite simply, Green was the most versatile player of his time in the NFL. When he was drafted in the fourth round by the Cardinals in 1979 from Henderson (Ark.) State University, he wasn’t exactly a one-man wrecking crew – but he was about as close as they came back then. He scored touchdowns as a kickoff returner—tying the league record with a 106-yard return against Dallas as a rookie—a punt returner, a runner and a pass receiver.

Three times in 1981 he both caught and intercepted passes in the same game, a feat that wasn’t performed even once in a season since the Redskins’ Eddie Sutton did it in 1957. In his first year as a converted wide receiver in 1981, Green caught 33 passes for an astounding 21.5 yards per catch and four touchdowns. By 1985, those stats went up to 78 catches for a league-leading 1555 yards (a 19.1 average) and 12 touchdowns (actually down two from the 14 TDs he caught the year before). 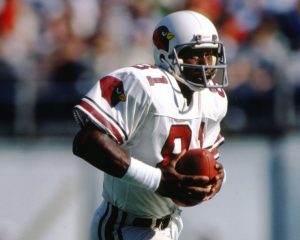 “The only thing Roy hasn’t done is tape all our ankles,” joked teammate Dan Dierdorf. Actually, Green was “forced” into becoming a pass catcher because of a rash of injuries to Big Red receivers. Green often ran routes with offensive players, and it didn’t take long for him to get noticed by coach Jim Hanifan. “You know,” Hanifan said to Green one day, “you might be our best receiver.” Green quickly became that. By the time he left the Cardinals, after the 1990 season, he held team career records for receptions, receiving yards and touchdowns.

Green produced his two finest seasons in 1983-84, catching 156 passes for 2,782 yards and 26 touchdowns. He made the Pro Bowl both years, as well as All-Pro team. Green had great speed, which earned him the nickname “Jet Stream.”

In 2016, the Arizona Cardinals inducted Green into their Ring of Honor.