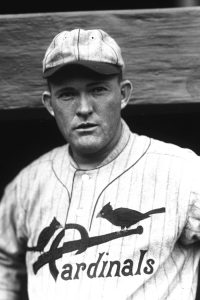 “The Rajah,” a two-time MVP and two-time Triple Crown winner, was the player-manager of the Cardinals’ first World Championship team in 1926, and became the first National League player to hit 300 home runs.

Hornsby began playing baseball with the Cardinals’ Class D club in the Texas-Oakland League. The St. Louis Cardinals purchased his contract in 1915 for $500. Hornsby wasn’t much of a hitter in the minor leagues. Cardinals manager Miller Huggins was convinced that if he put on some weight, Hornsby become a better hitter. During the winter of 1915, Hornsby worked on his uncle’s farm and packed on 20 pounds. The extra weight gave him the added strength he needed to become a powerful hitter. During the 1916 season, Hornsby posted a batting average of .313. Over the next few years he gained another 20 pounds, further increasing his powerful swing.

Hornsby won his first batting title in 1920 with a .370 average. That year he was moved from the outfield to play second base full-time. Hornsby continued with a streak of batting titles for the next five years. His all-time record came in 1924 and was hitless in only 22 games. Hornsby led the National League in 1924 with 121 runs scored, 43 doubles, 373 total bases and a slugging percentage of .696. Between 1921 and 1925, Hornsby maintained an unbelievable .402 batting average. 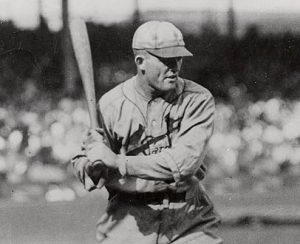 He led the league nine times in slugging percentage, four times in RBIs, and had 302 career home runs. He won Triple Crown awards in 1921 and 1925 and won the National League’s Most Valuable Player awards for those years as well. Hornsby attributed his great hitting ability to the care that he gave his eyes. He protected his eyes in every way he could, going so far as to avoid watching movies or reading books.

Hornsby led the Cardinals to their first World Series championship in 1926. The baseball world was surprised to see him traded to the New York Giants in 1927 for Frankie Fisch and an unknown pitcher named Jimmy Ring. Hornsby stayed with the Giants for one year. He had a batting average of .361 and hit 26 home runs in 1927 along with 125 RBIs. The Giants traded him to the Boston Braves in 1928 and he led the National League with a .387 batting average that year.

The Braves reluctantly traded him to the Chicago Cubs at the end of the season in a multiple-player deal that included $200,000 cash for Hornsby. In 1929, Hornsby helped the Cubs win the pennant that year and replaced Joe McCarthy as manager the following year. He was a player and manager until August 1932 when he was fired by Cubs’ general manager, Bill Veeck Sr.

Hornsby returned to the Cardinals briefly as a pinch-hitter and a utility outfielder before leaving to become the manager of the St. Louis Browns in June 1933. Hornsby stayed with the Browns until after the death of owner Phil Ball in 1937.

Hornsby was elected to the Hall of Fame in 1942.