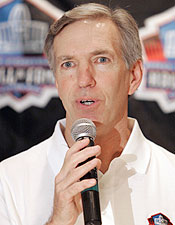 The St. Louis football Cardinals bolstered their secondary with the selection of cornerback Roger Wehrli in the first round of the 1969 draft. Wehrli spent his entire 14-year National Football League career with the Cardinals. The Big Red made Wehrli their first choice (19th overall) after he performed as an All-American at the University of Missouri where he intercepted 10 passes as a senior as well as leading the nation in punt returns that year.

Wehrli, utilizing his speed, finesse and strength, easily made the transition to the NFL and became a steadying force on the Cardinals’ defense. His reliable and durable play at the right cornerback position forced opposing quarterbacks to avoid his area. It is often thought that this fact kept Roger from being elected into the NFL Hall of Fame sooner since his numbers weren’t gaudy enough.

He earned a starting role with the Cardinals as a rookie recording three interceptions and leading the team in punt returns. The following season, he picked off a career-high six passes – a feat he would match in 1975 – to earn his first All-Pro and All-NFC honors. He also was named to the first of seven Pro Bowls that year.

A native of New Point, Mo., he was recruited by the University of Missouri after a stellar career at King City High School. There, he lettered in football, basketball and track for the Wildkats. Wehrli was a two-time All-Big Eight player and was the Big Eight Defensive Player of the Year as a senior. That same year, he was a unanimous All-America selection. Wehrli had 10 career interceptions at Mizzou. He also returned kickoffs and punts. In 1968, his 40 punt returns and 12-yard return average led the nation. To finish off an 8-3 season, Wehrli had a decisive interception to help lead Missouri to a 35-10 victory over the University of Alabama in the Gator Bowl. 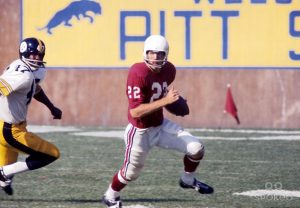 After being drafted by the Cardinals, Wehrli led or tied for the team lead in interceptions four times during his career. He registered an interception in all but two seasons during his career and amassed a total of 40 interceptions that he returned for 309 yards. He returned two of his picks for touchdowns – one on a 53-yard return in 1974 against the Washington Redskins and the other against the Minnesota Vikings in 1979. From 1974 to 1976, Wehrli picked off 12 passes as the Cardinals put together a string of three straight double-digit win seasons (10-4 in 1974, 11-3 in 1975, and 10-4 in 1976) that included back-to-back NFC East titles in 1974 and 1975. He intercepted three Roger Staubach passes, including two in the fourth quarter, during a key 31-17 win over the division rival Dallas Cowboys on Dec. 7, 1975. In doing so, he became the first Cardinals player since Hall of Famer Larry Wilson in 1966 to record three picks in one game.

In 1977, Wehrli again led the Cardinals in interceptions with five picks that included an interception in four straight games – all St. Louis victories. In 1981, with the Cardinals defense struggling, Wehrli was moved to the left cornerback position. In his first start on the left side, he made four tackles and broke up two passes as the Cardinals shut out the Buffalo Bills 24-0 to begin a four-game winning streak. Besides his ability to cover receivers, Wehrli had a knack for finding the ball and recovered 19 fumbles during his career – a franchise record.