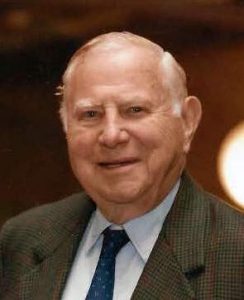 Robert Hermann was the founder and former owner of the St. Louis Stars soccer team, and a former president of the National Professional Soccer League.

Hermann was owner of the St. Louis Stars and California Surf of the North American Soccer League from 1968 to 1980 and chairman of the NASL’s executive committee. He was a founder of the National Professional Soccer League in 1966 and one of the leaders of that league until it merged with the United Soccer Association in 1968 to form the NASL.

The $5 million renovation of the St. Louis University Billikens’ soccer team, Hermann Stadium, was named after him in 1999. Another one of Hermann’s achievements was creating and donating the Hermann Trophy, which bears his name. The trophy, which is college soccer’s version of the Heisman Trophy, recognizes the outstanding male and female players in American college soccer. The trophy has been awarded each year since 1967 in the male category. In 1988, a second Hermann Trophy was inaugurated to recognize the top women’s collegiate player of the year.

The Missouri Athletic Club in St. Louis hosts an annual banquet to present the Hermann Trophy. In recent years, the format has expanded to include the top three finalists. The player’s coaches and families are also invited to attend the awards banquet.

“The MAC has created the perfect formula for presenting college soccer’s national awards,” said Bruce Arena, former U.S. Men’s National Team coach. “The MAC does an excellent job bringing in the players, their families, and coaches to St. Louis for the national press conference and the prestigious awards program.”