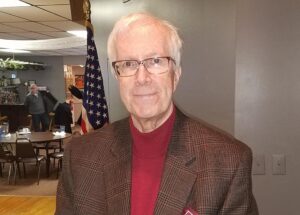 It’s a funny thing about Rick Hummel. You think you know him, got him all figured out … and then you don’t.

Hummel has been at the St. Louis Post-Dispatch for 51 years now – only the weather bird has been there longer. He’s been covering baseball for most of those years, 49 overall and44 exclusively. He has described more than 7,000 ballgames, as well as 35 All-Star Games and 41 World Series. He has written about the game often and eloquently enough to be honored with the J. G. Taylor Spink Award and inducted into the National Baseball Hall of Fame in 2007.

Stan Musial and Red Schoendienst, Bob Gibson and Lou Brock, Ozzie Smith and Whitey Herzog, Albert Pujols and Tony La Russa … Hummel was there with them, on the field, in the clubhouse, and at your kitchen table. If you have read about Cardinals baseball over the past half century, you have read Rick Hummel.

But did you know he was the beat writer for the American Basketball Association St. Louis Spirits, or that he covered St. Louis University hockey, or that he never aspired to be a baseball writer? When he was a kid growing up in Quincy, Ill., he could never dream so big.

“That was one of the last things I was thinking about,” Hummel said. “That was too intimidating.”

In St. Louis sports circles, and is major league baseball press boxes, Hummel is known as the “Commish.” Makes sense, right, what with all that baseball residue. But the nickname has nothing to do with balls and strikes. He was given the nickname when he ran a league among friends for a football board game. The label was cemented by the many years he has organized softball teams and NCAA basketball brackets.

And in Hummel’s career, which includes so many magical moments around baseball bylines, his most memorable experience isn’t cloaked in late-inning drama or a champaign celebration. The highlight of his career came while he was writing about boxing.

He was in Las Vegas in 1977, providing correspondence to the rising fortunes of St. Louis heavyweight, Leon Spinks. He spotted Muhammad Ali in the hotel casino. No thoughts about Spinks could be more meaningful than those coming from Ali, so the Commish worked his way through a long entourage to secure an audience.

He was invited into the penthouse suite, where Ali filled his notebook with his usual bombast and hyperbole. When the private interview concluded, Ali had a favor to ask of his guest.

He explained he had commencement presentations to deliver at two of the world’s most distinguished universities – Harvard and Oxford and he needed an analytical ear to give him some feedback.  “Would you listen to this?” he asked Hummel.

Ali then opened a briefcase and pulled out his speeches, “The Intoxications of Life” and “The Tragedy of Life.” For the next hour or more, he delivered the orations, mesm 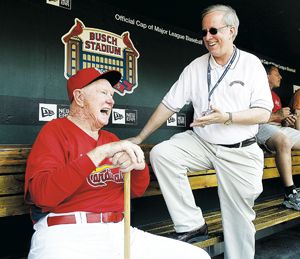 erizing Hummel as he floated eloquently through various topics – politics, religion, charity and governance. Each point was profound, each concept compelling. When Ali was done, there wasn’t single nit to be picked by an ink-stained sportswriter.

“I was spellbound,” Hummel said. “It was nothing like you’d expect to come out of his mouth. It was wonderful.”

The two shook hands parted and never met again. Hummel, the boxing writer, wrote his story about Ali. He doesn’t remember exactly how the piece played out, but you can bet it was straightforward, entertaining and comprehensive. It had the markings of what has made Hummel such a good baseball writer and such a trusted source for so many years.

“He gets the facts, paints an accurate picture and lets the readers draw their own conclusions,” said Bob Costas, who first met Hummel when Costas was doing play-by-play of the Spirits’ games in St. Louis. A national figure for many years since, Costas currently broadcasts baseball for the MLB Network.

“Other guys across the country who have covered a team might have more of an acerbic edge,” Costas added. “But Rick’s advantage over time is that he is universally regarded as trustworthy. He adheres to a way that is old-school, and that has served his readers well.”

When he joined the Post-Dispatch in 1971, Hummel had no idea he was headed to Cooperstown, no clue the Busch Stadium III press box would bear his name, alongside that of the man who hired him, Bob Broeg. He had no idea that, at 76 years young, he still would be covering Cardinals games in 2022, which he plans to make his final summer of full-time baseball writing.

But “the best baseball town in America,” has been the better for all of it, in tune with its storied franchise, well-informed about the game. Hummel wouldn’t have it any other way.

He is grateful to his wife, Melissa, “for encouraging me to keep working as long as I want to and am productive,” as well as his son and two daughters. He is grateful to the many managers, players and colorful characters he has been “privileged” to know. And he is grateful to those who have come along with him, headline by headline, sentence by sentence.

“I’m thankful to everyone for their support and patience with me,” Hummel said. “All I tried to do was inform and entertain, and I tried to do both in every story I wrote. Now, some are more entertaining than others, and some are less informative than others, but that’s what I tried to do every time I got in front of a keyboard.”

It’s funny, if you know that about Rick Hummel, you know he is much more than a baseball writer. And you know him well.