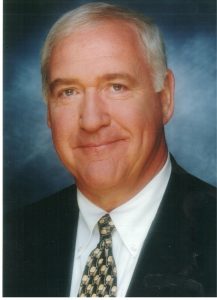 Rich Sauget isn’t just a baseball team owner, he’s a baseball man – and that goes a long way in explaining the Gateway Grizzlies’ success. Sauget, whose official title is general partner and operating officer of Gateway Baseball LLC, is a former professional player, but he’s also a fan.

A 1962 graduate of Belleville Cathedral High School (the predecessor to Althoff), Sauget was captain of the football, basketball and baseball teams. He earned a football scholarship to Notre Dame and also played baseball there. His son, Rich Jr. (a former Grizzlies manager and now mayor of the village of Sauget) went to Althoff and also played football and baseball at Notre Dame. The Saugets are the only father-son duo to play two sports for the Fighting Irish.

In football, Sauget played for coach Ara Parseghian on a national championship team in 1964. After graduating, he signed a contract to play baseball as a catcher in the Atlanta Braves organization, playing six seasons before finishing his pro career in the San Francisco Giants’ system.

It was with the Braves in 1970 where he got a brief taste of major league baseball. He was called up in the middle of the summer. but he never got to play before he was sent back down. After playing for the Giants’ AAA team in Phoenix in 1973, Sauget retired from pro ball, but he never lost his love for the game.

“When I was playing for the Braves, I had to write a thesis for college on the economic impact of the 1967 World Series (where the Cardinals defeated the Boston Red Sox),” Sauget said. “I had to study what a baseball franchise can do for a community and that’s how I became interested in eventually wanting to own a team. “My biggest enjoyment has been being around the business side of baseball and all the people we have running our team,” Sauget said.