Rich’s basketball coaching career began in the small community of Okawville, IL in the fall of 1956. He taught and coached the “Rockets” for four years, where he had great success.

Rich moved on to Benton High School in 1960. This began a 25-year span of exciting and successful teaching and coaching. He compiled an astonishing record number of wins that led to 21 regional tournament wins and 5 trips to the state tournament. In 1982, the Benton High School gymnasium was named the Rich Herrin Gymnasium.

In 1985, Coach Herrin took his highly successful prep coaching resume to Carbondale, Ill., and transformed Southern Illinois University into a high-energy program that produced seven straight trips to the postseason. Rich began his college coaching career at SIU in 1985 and led the Salukis for 13 years.

Herrin resurrected a Salukis’ program that had won only 30 league games over a six-year span before his first campaign in Carbondale in 1985-86. After an 8-20 mark in year one, his teams posted back-to-back 12-win seasons, before a breakout campaign in 1988-89 that featured the first of six consecutive 20-victory seasons and a trip to the NIT. In 1989-90, the Salukis posted 26 victories, captured the MVC regular-season title, and 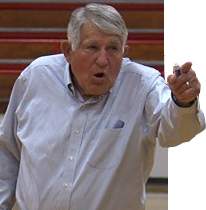 advanced to the NIT. During this time, he was named the Missouri Valley Conference Coach of the Year in 1990.

The 1990-91 season featured 18 wins and postseason victories over Boise State and Missouri State before a loss to eventual NIT champion Stanford. Herrin’s Salukis won their second MVC regular-season crown in 1991-92 and again advanced to the NIT.

In 1992-93, Southern Illinois was 14-4 in league play, good for second place. The Salukis then defeated Illinois State in the finals of the State Farm MVC Championship for SIU’s first NCAA Division I Tournament trip since 1976-77. The Salukis would also finish second in the MVC standings in 1994 and 1995. Competing as the second seed in Arch Madness, SIU again won the championship, making him the only coach in league tournament history to win 3 consecutive postseason championships.

By the end of his career, Rich had amassed an amazing total of 981 victories. Many of his players earned college scholarships and a numerous number of his players became basketball coaches. Several of his players went on to play in the NBA. Besides his loving family, the impact he had on so many young lives is one of Rich’s greatest legacies.

Rich received many honors during his illustrious career. He was honored to be inducted into several hall of fames; McKendree University, SIU, Illinois Basketball Coaches Association, St. Louis Sports Hall of Fame, Missouri Valley Conference, and the Southern Illinois Coaches Hall of Fame.