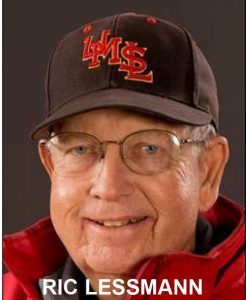 For 70 years Ric Lessmann has been getting up every day for a game. Either to practice, play or coach the game of baseball.

Considered one of St. Louis’ most renowned baseball instructors, Lessmann compiled a 1,365 556 (.711) record in 45 seasons as college baseball head coach at Harris Stowe State University, Meramec Community College and Washington University in St. Louis. He built a national reputation for teaching excellence while leading Meramec to a 963-318 record in 27 seasons. Lessmann, the nation’s third winningest junior college coach, never experienced a losing season and guided the Warriors to the National Junior College World Series nine times. In 1974, Lessmann reached the pinnacle, leading Meramec to the national championship. “We had three top of the line pitchers at Meramec, which made us dangerous in the tournament,” Lessmann said. “That team was tough, and a joy to coach.”

Lessmann’s next coaching step led him to revive baseball at Wash U. He took over the reigns in 1994. Lessmann guided the Bears to a 396-231 (.632) record in 17 seasons, and guided them to four NCAA tourney appearances.

Lessmann joined an elite club of college coaches with 1,000 or more career wins, becoming the 18th coach to achieve the feat in 1995. He retired from full-time coaching in 2010, but felt he still had more to give. Lessmann is in his fifth season as the pitching coach at the University of Missouri-St. Louis under legendary UMSL coach and former player Jim Brady. “I am very competitive and I love the competitiveness of the game,” Lessmann said. “That’s why I am at UMSL now as an assistant coach. I would miss the game if I were not coaching.”

Lessmann admits he had some great players along the way, but also had a knack as a good recruiter. “My knack was as a recruiter. I could talk to parents and players,” Lessmann said. “I could foretell the future for most players, and if they were going to fit into my program.”

Basketball was as much Lessmann’s game as a youngster. He had the chance to sign with Temple, Villanova or Illinois Wesleyan to play both baseball and basketball in college, but was signed by the New York Yankees at the age of 17 for a $4,000 bonus. “I did not go to college because I loved baseball so much. There was not one soul in my family at that time that went to college,” Lessmann added. “The signing bonus was the most money my parents had ever seen in there life.”

He spent two years in the minor leagues playing in Owensboro (Ky.), Hannibal (Mo.) and Macalester (Okla.). He tossed a no-hitter in the Midwest League in 1955 in Lafayette, Ind. “I still remember that no-hitter,” Lessmann said. “I threw the ball over the plate and was dangerous that day. I picked two people off first base. As I tell my pitchers now, it saves you at least 10 pitchers per pickoff.”