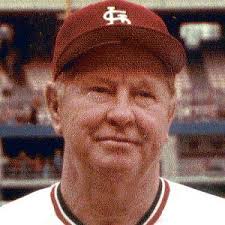 After retiring, Schoendienst began what was then the longest managerial tenure in Cardinals’ history, since broken by Tony La Russa, leading the team from 1965 through 1976. Under his direction, the Cardinals won National League pennants in 1967 and 1968 and defeated the Boston Red Sox in seven games in the 1967 World Series. He is currently the special assistant coach for the St. Louis Cardinals.

Schoendienst was born in Germantown, Ill. After being named the International League Most Valuable Player in 1943 and then spending almost a year in the Army during World War II, he was discharged in 1945 due to a severe eye injury and an injured shoulder. However, he made the Cardinals as a left fielder and finished the 1945 season batting .278 with a league-high 26 stolen bases. In 1946, he moved to second base, helping the Cardinals to win their third World Series title in four years. With sure hands and quick reflexes, he led NL second basemen for the first of seven seasons, handling 320 consecutive chances without an error in 1950. Schoendienst set a league record in 1956 with a .9934 fielding average, eclipsed 30 years later by Ryne Sandberg. Schoendienst won the Home Run Derby Contest in 1946. 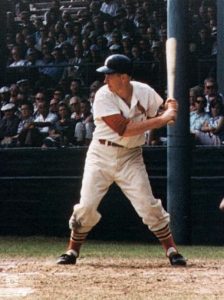 In 1953, Schoendienst finished second in the NL batting race, batting .342 to Carl Furillo’s .344. He scored 107 runs and drove in 79 runs from the No. 2 spot in the order, setting a career high with 15 home runs. He was selected to the All-Star team for the seventh time.

A 1957 trade brought him from the second-division Giants to the Milwaukee Braves in mid-season. He promptly led the team to its first pennant in nine years, batting .309 and finishing third in the NL MVP voting. They followed with a triumph in the World Series over the New York Yankees – the Braves’ only championship in Milwaukee, and the first for the franchise since 1914. The Braves repeated as NL champions in 1958 but lost to the Yankees in their World Series rematch. Schoendienst flew out to Mickey Mantle for the Series’ final out. In 1959, Schoendienst only appeared in five games (and was hitless in three at bats) as he successfully battled tuberculosis.

He returned to the Braves in 1960, playing in 68 games, then rejoined the Cardinals as a player-coach from 1961-63 and a full-time coach in 1964 before being named manager. His record as a St. Louis pilot over 12 seasons and two stints (1980; 1990) as an acting manager was 1,041-955 (.522). After two years away from the Gateway City as a coach for the 1977-78 Oakland Athletics, Schoendienst returned to the Cardinals as a coach, acting manager and special assistant to the general manager.