“Star of the Game Award”

Gordon “Red” Berenson, a youngster from Regina, Saskatchiwan, was expansion’s first superstar in the National Hockey League
(NHL). Way back when the St. Louis Blues were striving for success and the NHL’s Western (expansion) Division was struggling, the New York Rangers dealt Berenson to St. Louis for winger Ron Stewart. The trade caused hardly a ripple. At the time, there was little reason to believe that he would become a star. 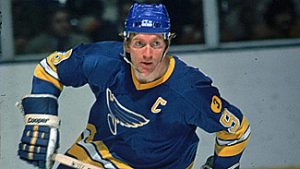 A year later, the experts were still shaking their heads in wonderment. Berenson had developed into the ace of the Blues and also became the first superstar of the Western Division. Newspapers detailed his exploits, and his catchy nickname – “The Red Baron.”

If any one individual made expansion hockey go in those early years, it was Berenson. And the Blues, of course, were the chief beneficiary. What first marked Berenson for stardom was a six-goal game against the Philadelphia Flyers on November 7, 1968, at The Spectrum.

Berenson had led the expansion Blues in scoring in 1967, their first NHL season, with a modest 22 goals. The next season, Berenson had three goals in the first month. However, in early November the Blues traveled to Philadelphia for a game against the Flyers. Late in the first period, it was scoreless when Berenson swept into the Philadelphia zone, went around defenseman Ed Van Impe, circled the net and put a shot in the top corner behind goalie Doug Favell. The game remained 1-0 until midway through the second period. Then Berenson scored at 10:26, 14:42, 15:14 and 19:35. Four goals in a period tied an NHL record. Four goals in nine minutes was unheard of, especially for a guy who never had scored more than seven in his first six seasons.

In the locker room after two periods, the Blues were sitting on a 5-0 lead, all of the goals from Berenson. Defenseman Doug Harvey sauntered over to the center and offered an explanation. “You know,” he said, “this would be a great game if you weren’t playing.”

In the third period, Berenson zeroed in on Favell again and hit the post with what might have been goal No. 6. Goals by Terry Crisp and Camille Henry – on an assist by Berenson – made it 7-0. Then Berenson took one final shot, a slap shot from the top of the circle. “It was the best shot of my life,” he said. “It took off and caught the top corner.” In the game’s final minute, Philadelphia fans were chanting, “We want Red! We Want Red!” and Scotty Bowman, the Blues’ coach, was urging Berenson to take one last shift. “It was unbelievable,” Berenson said. Six goals in a game tied an NHL record, achieved six other times but just once since 1921. 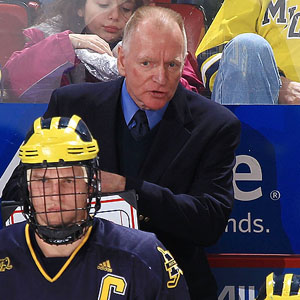 Berenson and Tim Ecclestone were dealt to the Red Wings for Garry Unger and Wayne Connelly in February 1971. Berenson and Unger, of course, were the key figures in the trade. Fans in both cities were unhappy with the trade. Berenson spent almost four years with the Wings but after 27 games of the 1974-75 season he had just three goals and three assists. Detroit dealt him back to St. Louis in exchange for Phil Roberto and the Blues’ third-round pick in the 1975 amateur draft. The headline in the Toronto Star told it all: BLUES-WINGS TRADE RETURNS BERENSON TO SCENE OF GLORY.

After his retirement in 1978, Berenson stayed close to the game, turning to the coaching ranks. He spent three seasons as head coach of the Blues, earning the Jack Adams Award as Coach of the Year in 1980-81 before becoming coach of his alma mater, the University of Michigan. He has been the head coach of the Wolverines since 1984.