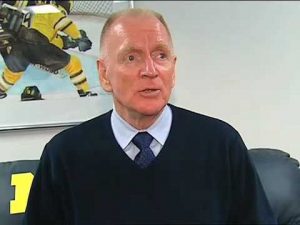 A solid all-around performer, Gordon “Red” Berenson enjoyed 17 productive years in the NHL, including two stints with the Blues. Along the way he registered seven 20 goal seasons and played on one Stanley Cup championship team in Montreal.

Berenson was drafted by Montreal, but spent three years with the University of Michigan against the advice of the Canadiens. Berenson scored 79 career goals and was a two-time Central Collegiate Hockey Association (CCHA) first team All-Star. He was also named to the 1962 NCAA champion all-tournament team. After the college season ended, he joined the Habs and became the first Canadian to make the jump from the U.S. collegiate system to the big show.

He played the entire 1963-64 season with the Canadiens, but split the next two between Montreal and the team’s American Hockey League affiliate, a reflection of the depth Montreal enjoyed at center during that period. He was traded to the New York Rangers, where he played parts of two seasons. 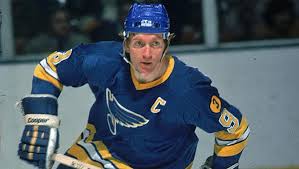 Late in the first year of expansion, he was traded to St. Louis, where he blossomed. Red scored 51 points in the last 55 games of the 1967-68 season and then helped the Blues reach the Stanley Cup finals against Montreal. Blues’ Coach Scotty Bowman turned Berenson into a true workhorse, playing him 35 to 40 minutes a game, which included plenty of time on specialty teams.

During his first full season in St. Louis, the “Red Baron” scored a career-high 82 points. That season, during an 8-0 beating of Philadelphia at The Spectrum, Berenson became the first player since Syd Howe in 1944 to score six goals in a game, a feat that distinguished itself in the record books because it was the only six-goal performance by a player on the road. 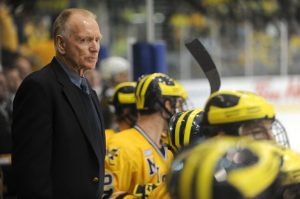 Blues traded the popular Berenson to Detroit for Garry Unger. Red enjoyed a solid career with Detroit and played two games for Canada during the famed 1972 Summit Series against the Soviet Union. Four years after trading him, St. Louis reacquired Berenson to anchor their checking line. He filled that role well and recorded two 20-goal seasons.

He retired in 1978 with 658 career points. He went on to coach the Blues and won the Jack Adams Award as NHL coach of the year in 1981 after leading the Blues to a 45-18-17 record. He later coached the Buffalo Sabres.

Red took over as coach of a struggling Michigan University hockey program in 1984 and immediately began building the Wolverines into one of the elite teams in collegiate ice hockey. He directed Michigan to the 1996 and 1998 NCAA national championships — the eighth and ninth in school history. Under Berenson, the Wolverines qualified for the NCAA Tournament a record 22 consecutive seasons from 1990-91 to 2011-12, marking the longest streak ever in college hockey.