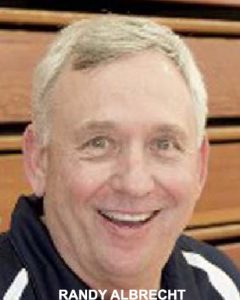 Legendary men’s head basketball coach Randy Albrecht may have retired from the STLCC-Meramec sidelines, but his legacy there will go on there forever. Albrecht coached the Warriors/Magic for 36 years, finishing with 28 consecutive winning seasons, including a 20-12 mark in his final season in 2013. With 736 career junior college victories, Albrecht finished the 2012-2013 campaign ranked eighth among active National Junior College Athletic Association coaches.

Albrecht, who is a member of the halls of fame for the NJCAA, the Missouri Basketball Coaches Association and STLCC-Meramec, was an 11-time Region XVI Coach of the Year. Albrecht became an institution at STLCC-Meramec while coaching his teams to regional titles and national prominence, including a No. 1 national ranking for much of the 1988-89 season.

Albrecht’s success was not limited to his time at Meramec. When STLCC converted to a district-wide athletics department in 2011, his experience helped from the building blocks upon which the program would be built. Albrecht turned in one of his best seasons in 2011-12. After an 8-6 start, Meramec reeled off 14 consecutive victories and finished at 24-8.

Albrecht has long been revered by is NJCAA peers, particularly those who have coached against him for much of 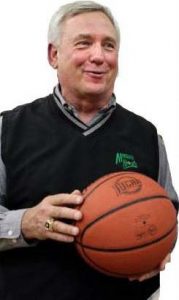 his 36-year junior college career. Possessing a disposition much more reserved and methodical than some of his much more animated counterparts, Albrecht was renowned for his success as a game tactician and his knack for maximizing the production from his teams.

Albrecht attracted high school talent which was largely either under-recruited, mispositioned, physically lacking in some area, academically unprepared, or transferred from an unhappy situation. “We were not a first choice for many student-athletes, but we presented an opportunity to play, develop, and advance to a four year university,” reflected Albrecht.

Many of Meramec’s players received scholarships at the NCAA DI, DII, and NAIA universities. Also, several played and graduated from NCAA Div. III schools. Eight players competed professionally in Europe, Asia, and Mexico. More importantly to Albrecht are the hundreds of players who graduated, including those with Master’s, Ph.D.’s, and Law degrees.

Albrecht, who cited recent health issues as contributing to his decision to call it a career, anticipates increased time with his family, something he hasn’t had the luxury of enjoying for the better part of the past four decades, which includes a three-year stint as the head coach at Saint Louis University from 1974-76. “In basketball, you miss Thanksgiving, you miss Christmas, and you’re usually not very good with Valentine’s Day,” Albrecht said.

As he transitions out of coaching, Albrecht cites his relationships with players as the most memorable aspect of his career. “The players are what you remember,” Albrecht said. “In many areas of life, you don’t have a ton of overachievers. But in athletics, you see some who over-perform their talent level. I think you see it a lot in athletics, and it’s great to be around those kids. It was a lot of fun and very rewarding.