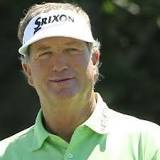 (Portions of this article from May 2014 Golf Content Network)

Peter Jacobsen was born and raised in Portland, Oregon, and played college golf for the Oregon Ducks. He won seven times on the PGA Tour, his last in the 2003 Greater Hartford Open, and he has won two majors on the Champions Tour. He has played in two Ryder Cups and served four times as a player director on the PGA Tour Policy Board.

Although Jacobsen occasionally plays on the Champions Tour, he spends much of his time as a golf commentator for Golf Channel and NBC sports. His well-liked “Jake’s Takes” add levity to the weekend broadcasts and continue the light-hearted humor of his previous shows “Peter and Friends” and “Peter Jacobsen Plugged In.” He is on the Cleveland/Srixon staff and gives clinics—which include his uproarious impersonations of well-known players—around the country.

One of the most popular and colorful touring professionals, Jacobsen was honored for his career at the Tour Championship in Atlanta in 2013 when he was named the PGA Tour’s recipient of the Payne Stewart Award “given to a player sharing Stewart’s respect for the traditions of the game.” What is most fitting about the award is that Jacobsen was a close friend of Stewart, who died in that 1999 airplane tragedy, and has devoted his life to making the world of golf as entertaining and as meaningful as he can.

For example, there was “Jake Trout and the Flounders” with Stewart on harmonica, Jacobsen on vocals, and Mark Lye on guitar belting out such “golf and roll” standards as “I Love to Play,” “Time to Let It Fly,” “Love the One You Whiff,” “Struggler’s Blues,” and “Hittin’ on the Back of the Range?”

In 1989, he established Peter Jacobsen Sports, a sports marketing and management firm that has produced more than 250 events worldwide, including the CVS Caremark Charity Classic in Rhode Island, and has helped to contribute more than $40 million to charity. “Giving back” has always been a part of his agenda, and he likes to focus both on children’s health and education and on military veterans’ quality of life.

Jacobsen has co-designed more than 10 golf courses and has written two books so far, “Buried Lies: True Tales and Tall Stories from the PGA TOUR” and “Embedded Balls.” No bio of Peter Jacobsen would be complete, of course, without mentioning the best football-type tackle in professional golf. That came in 1985 with his upending of the streaker on the 18th hole of Royal St. George’s in the Open Championship. Jacobsen made bogey on the hole!

He has been married to his wife Jan since 1976, and they have three children, Amy, Kristen, and Mick.