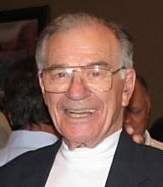 Paul Martel’s decision to become head football coach at St. Louis U. High was not an easy one. Rev. Gerald Sheahan, S.J., the school principal, had offered him the job to replace Gene Hart, who was moving on to become assistant athletic director at St. Louis University. Hart had recommended Martel, his former Rockhurst College teammate in Kansas City.

Martel was tempted by Father Sheahan’s offer, in that summer of 1959. He was aware of the reputation SLUH had forged in high school football in the St. Louis area. And there was the draw of a pay increase, which his young and
growing family sure could use. But his Bishop Miege High School team had just completed a perfect 9-0 season,
having outscored opponents 300-39, and finished No. 5 in the Kansas Class AA rankings.

“And we had eight starters returning the next year from that offense,” Coach Martel said. He also had coached the Bishop Miege basketball team to a 19-5 record, and would have four starters back from that team. Further, except for the four years he served in the U.S. Navy, the 35-year-old Paul Martel had spent his whole life in the Kansas City area.

Still, attracted by the challenge of moving to a larger school in a new community, Coach Martel accepted Father Sheahan’s offer, and became the 14th head coach in a football tradition that had begun in 1916. None of the previous 13 SLUH coaches had served more than six years. It didn’t take long for him to discover what he was in for: Before his first season started, a player’s mother advised him to wait until after the CBC game before selling his Kansas City house.

No problem. The 1959 Junior Billikens went undefeated, shut out six of their eight opponents, and easily defeated CBC. Coach Martel was there to stay. Over his 29 seasons at St. Louis U. High, his teams won the 1970 Missouri Class 4A championship, qualified six times in the first 19 seasons the playoffs were staged, won eight of the 12 Bi-State
Conference championships, and compiled a record of 200-79-8.

Including his one season at Immaculata High in Leavenworth, Kansas, nine at St. Agnes/Miege, and one with the semipro St. Louis Gamblers, his career head coaching record was 285-105-12. After his last season at SLUH in 1987, Martel served as assistant coach at Washington University and Vianney High School. He retired from coaching in 2001.

Coach Martel maintained a sharp mind for the game right up to the end of his life, which ended January 28, 2016, just two weeks before his 92nd birthday. He was so proud of Henry Jones, the only SLUH alumnus to make a living in the National Football League, who joins him in the St. Louis Sports Hall of Fame. Coach received the Hall’s “Metro Legends” Award in 2011.

Just a couple months before he died, Martel reflected on his career and life. “You know,” he said, “coaches don’t get rich. Our wealth comes from having a part in so many lives. We’re touched by it. I wouldn’t have traded it for all the gold in Fort Knox.”