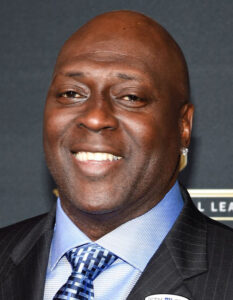 If there was any doubt about the St. Louis Football Cardinals’ first-round draft selection in 1979, it was quickly dispelled. All Ottis (OJ) Anderson did in his debut game in the National Football League was to rush for 193 yards against the Dallas Cowboys.

Anderson went through and around the Cowboys’ defense (running out of his shoe twice). The 193 yards was the second-most rushing yards in a rookie debut, just one yard behind Alan Ameche of the Baltimore Colts in 1955.

However, Anderson wasn’t through displaying his talent that first season. During his initial NFL season he rushed for a total of 1,605 yards, which was one of the few bright spots in the Cardinals 1979 season, when they finished 5-11. Still, he managed the first of back-to-back Pro Bowl selections that year and was named the ’79 NFL’s Offensive Rookie of the Year. He also received Pro Bowl and first-team All-Pro honors.

Anderson, who grew up in West Palm Beach, Florida, went to the University of Miami, where in four years he broke eight long-standing rushing records. His career achievements included breaking records in the following categories: career rushing yards with 3,331; all-purpose yards with 4,265; most 100-yard games with 13; and for longest kickoff return with two 100-yard returns. 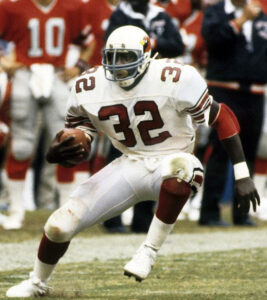 He also established himself as the best runner in the history of the school. He broke Chuck Foreman’s career rushing records with the Hurricanes. He became the first player to rush for more than 1,000 yards in the school’s history his senior year with 1,266 yards. He graduated in 1979 as the team’s all-time leading rusher with 3,331 yards.

The Cardinals selected him with the eighth pick in the draft.

In his first six of eight seasons with the Big Red, Anderson rushed for more than 1,000 yards in five seasons. The lone exception was in the 1982 strike-shortened season, when he rushed for 587 yards in eight games; a pace for well over 1,000 yards in a full 16-game season.

Anderson, however, suffered a myriad of injuries during his years with the Big Red, curtailing the tailback’s effectiveness and the Cardinals traded him to the New York Giants in the middle of the 1986 season.

After a slow start in New York, Anderson became perhaps the soul of the Giants as the top running back for Bill Parcells’ ball-control offense in 1989 and was named NFL Comeback Player of the Year. He scored a career-high 14 rushing touchdowns and rushed for 1,023 yards on 325 carries. He was also the top running back for the Giants the following year when they won Super Bowl XXV, and was named Super Bowl MVP for his 102 yards and a touchdown on 21 carries.

In fact, when he retired after the 1992 season, Anderson was one of only four running backs in NFL history to score rushing touchdowns in two Super Bowls and win Super Bowl MVP. He ranked seventh in rushing TDs and eighth in rushing yards.

After his NFL career, O.J. went on to pursue ventures from radio show appearances, community outreach, entrepreneurial projects, and more.