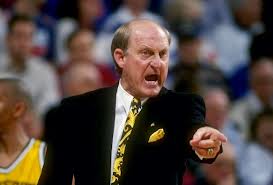 No other coach at the University of Missouri can say they are more “grounded” into the fabric of the state of the institution than Stormin’ Norman Stewart. Don’t think he isn’t fond of that phrase, it graces the corner of his personal mailing envelopes along with a little cyclone symbol.

It’s his trail to Mizzou that supports that statement. A product of Shelbyville (MO) High School, he went on to Mizzou where he played in the mid-’50’s, Norm smiles when reminded of his own playing success. He once scored 36 points against Colorado and 33 against Iowa in back-to-back games in 1956. Wearing #22, Stewart was an outstanding player. He averaged 24 points per game for his career, fourth all-time on the Missouri list and was a Helms Foundation All-American in 1956. Oh yes, he was the No. 1 pitcher on his 1954 NCAA National Championship baseball team too!

He earned a shot at professional basketball with the powerful Hawks in 1956. Norm will tell you he is the reason the Hawks won the 1957-58 NBA World Championship beating the Boston Celtics! “The best move the Hawks ever made was to cut me during the season so they could trade for Hall of Fame guard Slater Martin who was the link they needed to beat Boston,” he laughs.

It was also the best move for Stewart’s career. It pushed him towards coaching – first at Northern Iowa University. Then, at age 32, he was named head coach of the Tigers and became one of the top coaches in Division I history. With 731 wins at the two schools, he currently ranks 30th on the all-time NCAA coaches list. The rest of the stats are equally as impressive: two National Coach of the Year awards, eight Big Eight Conference and eight more post-season titles and 16 NCAA appearances.

Stewart is being rewarded with induction into the St. Louis Sports Hall of Fame because he directly is the reason Missouri began the tradition of playing Illinois in St. Louis for the annual Busch Braggin’ Rights game istead of on their campuses. Stewart and his arch rival, Coach lou Henson at Illinois University, created an annual event in St. Louis drawing 20,000 fans and standing room only every December. The rivalry began in 1980 with an Illinois win. Stewart would coach the game through 1998. With many classics and surprises along the way, Illinois won nine of the first ten, but the Tigers took over and won seven of the last nine under Stormin’ Norman.

The famous triple overtime game in 1993 when 19th ranked Illinois met a struggling Tiger team would become the most memorable basketball event in college basketball history in St. Louis. The final score: Missouri 108, Illinois 107. It changed the season for both teams. The Illini stumbled, finishing at 17-11 and fourth in the Big Ten while Mizzou took off to one of their greatest seasons, winning 19 of the next 20, undefeated in the Big Eight, 28 wins overall and a Final Eight appearance in the NCAA Tournament.

In addition, Stewart gave many St. Louis area high school basketball players an opportunity to play and excel at their state university. His greatest teams ever were headed by  Steve Stipanovich and Jon Sunvold. Stipo went on to win All-American honors at Mizzou and an NBA career.

A cancer survivor, Stewart and his wife, Virginia, helped to found Coaches vs. Cancer some 21 years ago. The group has grown into a nationwide collaboration between the American Cancer Society and the National Association of Basketball Coaches. It has already raised more than $100 million to support the mission to eradicate cancer.