Norbert Julius Thurmer, affectionately known as Softie or T-Bird, was part owner and third base coach of the St. Louis Browns Men’s Professional Fastpitch Softball team. In 1973, the Browns, who averaged playing before some 5,000 fans a night, won the World Professional Fast-pitch Championship, beating the Montreal Royals in the finals.

His soccer team included both Charlie Columbo and Frank Borghi who played for the United States National Team that beat England in the 1950 World Cup. In 1958 alone, Thurmer sponsored 11 bowling teams and he is a supporter and benefactor of St. Louis University Billikens basketball. He has been described as a poor man’s Toots Shore, the legendary saloon keeper and sports celebrity from New York City. 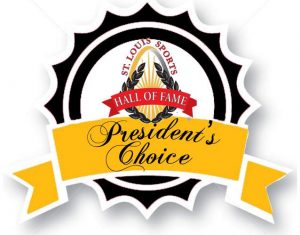 While at a high school basketball game in the late 1970’s, he was tapped on the shoulder and asked, “Are you the real Thurmer?” The person doing the asking was none other than future Hall of Fame announcer and television host, Bob Costas. In 1983, a testimonial dinner was held in his honor and Costas was Master of Ceremonies.

Patrons at Thurmer’s over the years included Big Red players and coaches, including Jim Bakken, Irv Goode, Johnny Roland, Terry Miller and Jim Hanifan. On Monday nights, Big Red coaches would order strip steak dinners and bring them back to Busch Stadium for their coaches meetings. They let Norb know that when the beer ran out the coaches meeting was over. Former Billiken coach Rich Grawer and his assistants would regularly stop in for lunch. Back in the day you might have run into former mayor, AJ Cervantes or even college basketball announcer Billy Packer.