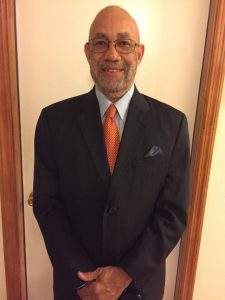 Nino Alex Fennoy became the head coach of the girls’ track and field and cross country teams in 1976 at Lincoln Senior High School in East St. Louis, IL. In 1998 when Lincoln merged with East St. Louis Senior High School, he continued his coaching tenure and remains in that capacity today. He has coached these two sports for a total of forty-four years.

Coach Fennoy, as he is affectionately known, is much more than a coach to his athletes. He is a mentor, friend, and most importantly, a father figure. His illustrious coaching career has garnered twenty-six (26) top three place finishes: seventeen (17) Illinois High School Association Class AA Track and Field Championships, nine of which were consecutive state championship team titles from 1982-1990; eight (8) state runners-up: 1987 in cross country; 1981, 1991, 1994, 1999, 2007, 2010, and 2018 in track and field; and one third place in track and field in 2006. His first trac 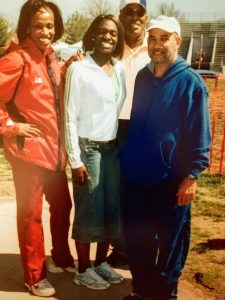 k championship was 1978 and his most recent championship was 2019. These accomplishments have been possible with the assistance of a phenomenal staff of assistant coaches and many great co-workers, parents, and volunteers.

During his forty-four years of coaching high school girls, Coach Fennoy has received numerous awards regionally, state-wide, and nationally. He was slected Coach of the Year in 1994 by the National High School Athletics Association (NHSACA) and by the National Federation of Interscholastic Athletics in 1995. Additionally, he was inducted into the Illinois Track and Cross Country Coaches Association Hall of Fame in 1995 and the NHSACA Hall of Fame in 2010.

From the cinder track at Parsons Field to the Clyde Jordan Stadium Coach Fennoy has developed scores of individual state champions, among them are legendary Six-Time Olympic and Gold Medalist, Jackie Joyner-Kersee and Two-Time Olympic and Gold Medalist, Dawn Harper-Nelson. These athletes exemplify his “Winning in Life” philosophy which is rooted in his strong spiritual belief that through God all things are possible.

In addition to his commitment to education and athletics, Coach Fennoy has contributed over fifty (50) years of volunteer community service. He is co-founder and head coach of the East St. Louis Community Athletic Club, The Railers, a summer track club which travels and competes throughout the United States.

His mission is to make a difference in the world, one individual at a time. He is dedicated to many people, but especially his family- his better half Toni, son Alex, daughter-in-law Denise, granddaughters: Alexis, Breon, Eboni, Brandy, and great-granddaughters Nyla and Harley. His desire, determination, and dedication were instilled in him by his parents William and Gladys Fennoy and his siblings: Carmen Fennoy Moody, Esq., Narmen Fennoy Hunter, William H. Fennoy, and Lovell Fennoy, Sr.