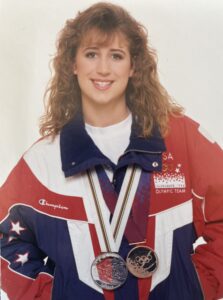 Nikki Ziegelmeyer Meyer was born and raised in Imperial MO to her parents, Debbie and Wayne Ziegelmeyer. She attended Windsor High School and earned two Olympic medals before she graduated from high school!

Nikki was an energetic and rambunctious young girl. Her parents were looking for something for her to expend all that energy. They took her to a local roller rink at the young age of 3. By the age of 7, Nikki won her first of several National Age Group Championships. In 1984, Nikki was glued to her TV set watching the Summer Olympics held in Los Angeles. A young gymnastic star, Mary Lou Retton, became one of America’s sweethearts and inspired Nikki to tell her mom, “I want to be an Olympian.” As Nikki continued to dominate regional roller-skating competitions, she realized that this was not an Olympic sport and if she wanted her dream to come true, she needed to look elsewhere. Once again, her parents thought the easiest sport to transition to would be ice speed skating.

Nikki joined the Gateway Speed Skating Club in the fall of 1987. In January 1988, St. Louis hosted the World Championships, which was used to select the countries to compete in Calgary for the first Short Track introduction to the Winter Olympic Games. Nikki was there as a 13-year-old to hand out medals.  This exposure reinforced her commitment to skate at an international level. The following year, 1989, she won her first Short Track National Championship in the Juvenile Girls division. That was followed up in 1992 with another National Championship. 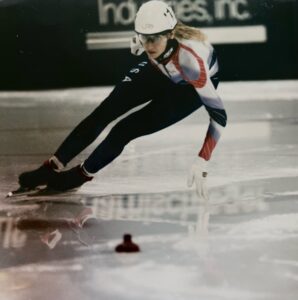 To fully develop her talents, she moved to Northern Michigan to train with the US Short Track Team in 1991. She was only a sophomore in high school. The Olympics were right around the corner. Nikki qualified for the US Team and went on to earn a Silver Medal on the US Women’s Relay Team in Albertville France. The US Training Facility was moved in 1993 to Colorado Springs and Nikki was uprooted once again. The Winter and Summer Olympic Games were being separated by two years, starting in 1994, so winter athletes were once again, training hard. Nikki made the 1994 US Olympic Team. She competed in the relay once again and the women’s team won a Bronze Medal. She now had two Olympic medals by the age of 18. She retired and returned to Imperial and simply wanted to graduate with her classmates and be a teenager!

As 1998 was approaching, the Olympic fever caught up with her once again. Nikki went into training and quickly regained her form. In October of 1997, four months before the 1998 Winter Olympics in Nagano Japan, she went to Lake Placid for training. She had a serious fall crashing headfirst into the boards and shattering two vertebrae. She was taken to a hospital in Albany NY and her mom flew in to be with her and consult with the doctors. They performed experimental surgery by inserting a rod to stabilize her back. It was successful but ended a brilliant speed skating career.

Nikki and her husband Roger Meyer are both firefighters: Nikki in Olivette and Roger in the City of St. Louis. She also has a daughter, Summer Brown, who attends Missouri State University.