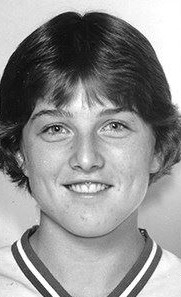 Nancy Kassebaum Metcalf is the daughter of Ralph (d. 1999) and Carole Kassebaum.  Nancy grew up playing sports with her brothers (Andy, Danny, and David), many cousins, and neighborhood friends, in her hometown of Belleville, Illinois.   The Kassebaum backyard, driveway, or garage provided most of the early grooming of skills and competitiveness, with both Dad and Mom front and center in participation. In that small, one-car garage, the KBA (Kassebaum Basketball Association) began.  WIBV radio station had the occasional call-in with game results.

The ball fields and playgrounds of East Belleville continued to provide the training grounds for her development.  The competition included her oldest brother Andy’s friends and teammates. Andy was very proud of his sister and took her everywhere as the situation allowed. Many sodas were won in the Intramural Gym at Belleville Area College (now SWIC) when Andy and Nancy would challenge anyone to a 2-on-2 basketball game.

Having never played tennis in her life, the late Coach Bill Duhadway saw Nancy in a P.E. class and developed her into a player who went to state in doubles competition her junior and senior years. Also, at 15 years old, Kassebaum was introduced to the Whiz Kids softball team, led by George Renner III.  This team became legendary, traveling all over the country, most times dominating its competition. Nancy played for the Whiz Kids for 16 years.

Nancy received approximately 80 college solicitations for her athletic talents.  Eastern Illinois University earned her trust. Nancy‘s four-year Basketball and Softball playing career is marked with many records, many of which still stand. In basketball, her 683 career assists and 479 steals are still school records. Her basketball scoring record of 1,807 points in her 1980-83 career wasn’t surpassed until 2009.

Deanna D’Abbraccio, Former EIU Head Softball/Assistant Basketball Coach bragged, “To say that Nancy Kassebaum was an outstanding student-athlete at Eastern Illinois University is an understatement.  No athlete has had a greater impact on a women’s athletic program than Nancy.  Her athletic and academic acumen is celebrated in the accolades and awards.  It was a pleasure to watch her field ground balls, turn double plays, and shoot jump shots!  Humble, quiet, smart, intense, and competitive, Nancy was the ultimate teammate who made everyone around her better, including her coaches.  A one in a million!”

In 1990, Kassebaum was the first female athlete inducted into the EIU Hall of Fame.  In 1995, a statue was commissioned by the late Dr. Glenn Williams and Joan Williams, in the likeness of Nancy recognizing the values, commitment, excellence, and integrity that Nancy demonstrated as a student-athlete at EIU.  Her No. 13 jersey was retired in 2005, and she is recognized as one of 10 Female athletes with the biggest impact on EIU athletics.

Honored as a 3-time Academic All-American, Kassebaum’s success in the classroom is her greatest achievement.  As a graduate assistant with EIU’s women’s basketball team, she helped student-athletes develop strategies and techniques to stay disciplined and focused, both on the court and in the classroom.

After college, Nancy continued to excel in her professional career.  In 1991, she was recruited to develop and manage the Cardiopulmonary Rehab Department at St. Elizabeth’s Hospital, Belleville, IL. She continued until 2000 when she was recruited by Dr. Morris Kugler for a Breast Cancer research project as a Clinical Research Assistant with the National Cancer Institute ACOSOG Z10 and Z11 studies.   This blossomed into the development of the Breast Center of Belleville, where the lives of so many, especially women, were impacted.  Currently employed at Sparta Community Hospital, Nancy is involved with the inaugural dispatch of a Medical Mobile Clinic that provides medical services to underserved, rural communities in Southern Illinois

Kassebaum continues to be involved in the community.  She serves as an Extraordinary Minister of Holy Communion and Rosary Leader at St. Agatha/St. Joseph Parish,  and she volunteers with the American Red Cross, the Belleville Humane Society, and the Freeburg Animal Hospital.

Nancy has been married to her husband Al, for 24 years and is blessed with two step-daughters and their families:  Amy and Keith, grandchildren, Mitchell and Stella; Jamie and Ed, grandson, Ryan. Besides her brothers, other family members include her sister-in-law Marchelle and Ise, nephew Andrew (Caitlin), with grandnephews Jakob and Lukas; niece Amy (Eamon) with grandnephew Liam; nieces Ellie and Emma and nephew William; and father-in-law Raymond. Also, Mother Carole, who continues to be the driving force behind TEAM Kassebaum.

Kassebaum favorite memories: From HS: BB practices at 6:00 A.M. in a cold gym while Coach Jim McHaney blared upbeat music.  After a win, the Queen’s – “We are the Champions” booming. College Hi-lite: Finishing 2nd in the Nation in Softball in 1982.

Below is a list of some of the honors that Nancy has received over the years: