A trip to a basketball camp between her freshman and sophomore years of high school changed Nancy Fahey’s life. “I did not think my parents would let me go,” Fahey said. “I remember bringing the brochure home and I was so nervous.” Fahey’s parents – Art and Kate – decided to let her attend and her path to basketball was paved.

“I felt like that was the turning point for me. I found out I loved the game and the teaching of the game. I got a chance to grow,” she said. “Sometimes I think if I never went to that camp, I never would have had a career in basketball. “It’s a small thing that parents do for you and you don’t even realize,” Fahey added. “It was a big opportunity for me at the time.” 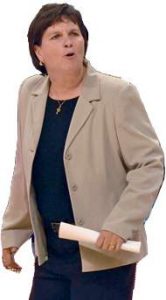 Fahey, the youngest of four growing up on a family farm in Belleville, Wis., went on to become a four-year letter winner at the University of Wisconsin-Madison, starting two years at point guard for the Badgers. She graduated with honors from Wisconsin in 1981. Fahey’s first coaching stop took her to Johnsonburg High School in McHenry, Ill., where in each of her two seasons on the sidelines, she led the Skyhawks to a regional championship, a sectional final and a 20-win season.

Since 1986, Fahey has been roaming the sidelines at the WashU Field House. She enters her 31st season on the Danforth Campus with a 711-130 (.845 winning percentage) record. Fahey is the only coach in NCAA Division III history to win five national championships,
including a stretch of four straight crowns from 1998-2001. Fahey has also led Washington U. to a Division III-record 10 Final Four appearances, 22 University Athletic Association (UAA) titles and 28 NCAA Tournament berths.

In 2012, she became the first NCAA Division III representative to be inducted into the Women’s Basketball Hall of Fame in Knoxville,

Tenn. During the 2015-16 season, Fahey became the second fastest coach in NCAA men’s and women’s basketball history to reach 700 wins, doing so in her 826th game.

With all the success Fahey has had on the basketball court, she was quick to credit her players. “When it comes down to it, no coach makes any shots or steals any basketballs,” Fahey said. “When you can work with players that are highly motivated, if you ask them something reasonable they give you a reasonable response.” And Fahey will be the first to tell you she expects a lot out of her player’s night in and night out, but she always returns the favor.

“No one appreciates a leader that does not lead by example. Coaches have that same responsibility,” said Fahey. “If I have an expectation that the players are going to work that hard, then I have to show them that I am willing to also work that hard. That is only fair.”