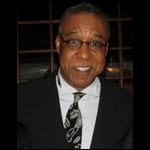 Morris Bradshaw took the long and winding road from Edwardsville to the pinnacle of the NFL and made the most of it in a striking and distinguished career.

The 1970 Edwardsville High graduate excelled as a running back and receiver at Ohio State and then played nine memorable seasons in the NFL. He played on two Oakland Raiders’ Super Bowl champions along the way, so it’s no surprise that Bradshaw is getting inducted into the 2022 St. Louis Sports Hall of Fame.

It all came together for him at the perfect time. “I’m a first believer in timeliness,” Bradshaw said. “You have to be in the right place at the right time.” The timing was proper early in his life, Bradshaw said. He added: “I like to think my upbringing and family structure at a young age were very helpful.”

Bradshaw exceeded at every level: high school, college, and the pros. And even when his playing days were done with the Raiders, he worked for them in Oakland and Los Angeles, serving as Senior Vice President of Community Relations, Public Affairs and Alumni Director.

He stayed with them in the front office for 29 years before calling in a career in football. A remarkable one, by any standard. “It was one of the better decisions I made,” Bradshaw said of taking the job with the Raiders.  “I was with them for 37 years (counting time as a player) and I learned quite a bit from both Al Davis and John Madden.”

Madden died in early January and Bradshaw said the loss of his former coach hit him like a thunderbolt. “It was a tremendous loss for everyone. He was a coach by nature, and he took the NFL to a different level,” Bradshaw said. 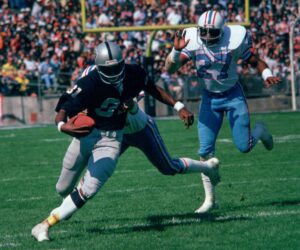 The Raiders gave Bradshaw the ultimate opportunity, the chance to play in the Super Bowl. Bradshaw was on two Super Bowl champions – 1976 against the Minnesota Vikings and 1980 against the Philadelphia Eagles – during his eight years with the Raiders from 1974-1981.

He also played one season with the New England Patriots in 1982. Not bad for a fourth-round draft choice as a receiver in 1974. Overall, Bradshaw caught 90 passes for 1,416 yards and 12 touchdowns.

Naturally, Bradshaw relishes his time with the Raiders and cherishes those two Super Bowl championships. Madden was the team’s coach in the first one and Tom Flores guided the Raiders to their second one. Davis, the team’s owner, had an aura all his own. Davis died in 2011. “He was the most unique individual I’ve ever met,” Bradshaw said of Davis.

Bradshaw’s athletic experiences in Edwardsville started as a youth, though he didn’t play football until the ninth grade. He credits Tigers’ coaches Paul Fuchs and Dick Ford will helping him to hone his skills. “I received pretty good coaching in high school,” Bradshaw said. By the time Bradshaw was a senior, he developed into one of the state’s top players and was a heralded sprinter in track. He finished second in the 100-yard dash at the Illinois High School Association finals his junior and senior seasons.

On the football field, Bradshaw rushed for 1,150 yards and tallied 13 touchdowns his senior season as the Tigers finished 5-3-1. The St. Louis Globe-Democrat chose him as their Prep Football Player of the Year.

Colleges came calling and Bradshaw chose Ohio State and the opportunity to play for legendary coach Woody Hayes. Bradshaw ran the ball for Hayes and the Buckeyes until a guy named Archie Griffin came along and changed Bradshaw’s duties. He became a wide receiver.

“It was a challenge – more of a mental challenge,” Bradshaw said. He experienced another challenge with he retired as a NFL player and still another one when he retired from the Raiders’ front office.

When the Raiders moved to Las Vegas, Bradshaw decided to call it a career. Nevertheless, once a Raider, always a Raider. The same goes for the Tigers and the Buckeyes. Bradshaw is a member of the Edwardsville Athletics Hall of Fame and played on two Rose Bowl teams at Ohio State.

Right place, right time. “It does have the appearance of coming full circle,” Bradshaw said of returning home and being enshrined into the St. Louis Hall of Fame. “I’m looking forward to it for a lot of different reasons.”