Any discussion of the best players to play soccer at Quincy University begins with Mike Villa. Villa came from Vianney High School in St. Louis and played basketball and baseball, but he’s remembered most for helping the Hawks win soccer national championships in 1966 and 1967.

Villa went on to coach soccer for 25 years at Vianney, 16 years at Triad in Troy, Ill., and one season at Assumption in East St. Louis. His teams at Vianney reached the state final four 10 times and won seven championships. The Griffins were mythical national champions in 1992 and went 64 games without a loss during a stretch from 1991-93. Vianney was named the National Champion by USA Today in 1992.

Villa was even more successful coaching Triad’s girl’s team. The girls made the state quarterfinals in 2002, finished second in 2003, and eventually became the state champions. His girls teams didn’t lose a conference game in 10 years, going 99-0-1. 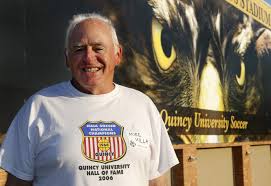 Villa played basketball and baseball at Vianney. “The school didn’t have a soccer team back then, so I played for Carondelet Sunday Morning Athletic Club then,” Villa says. “In high school, I thought I was a better basketball player,” he said. “There’s not a lot of 5-foot-8 basketball players going anywhere. I thought I had a chance to play professionally, either baseball or soccer. I thought soccer would be my best  choice.” he said.

Villa went to Quincy College on a basketball scholarship and played soccer and baseball as well all four years. But he excelled in soccer. “When I was a freshman, Quincy’s soccer program was in its first year,” he said. “We went undefeated. By my junior and senior seasons, we were National Champions. I was MVP of the national tourney my senior year.” That was the season he scored 10 goals in one game and 44 for the season. Those efforts earned him runner-up honors as the Outstanding Collegiate Player.

After graduating from Quincy, Villa played for the Busch team, scoring the only goal in the title game of
the U.S. Amateur Tournament in 1972.

He became the first soccer player inducted into the NAIA Hall of Fame. He was chosen Most Valuable Forward in Quincy history and his No. 6 was retired. Villa was also named to the Quincy U. Hall of Fame. Other halls of fame he was named to included those at Vianney, St. Louis Soccer, Missouri Soccer Coaches, and the National High School Soccer Coaches.

Later, Villa can be remembered as the Cardinals’ longtime batting practice pitcher. I threw to the likes of Lou Brock, Mark McGwire and Albrt Pujols. The last time I threw was the year after David Freese was the World Series MVP.